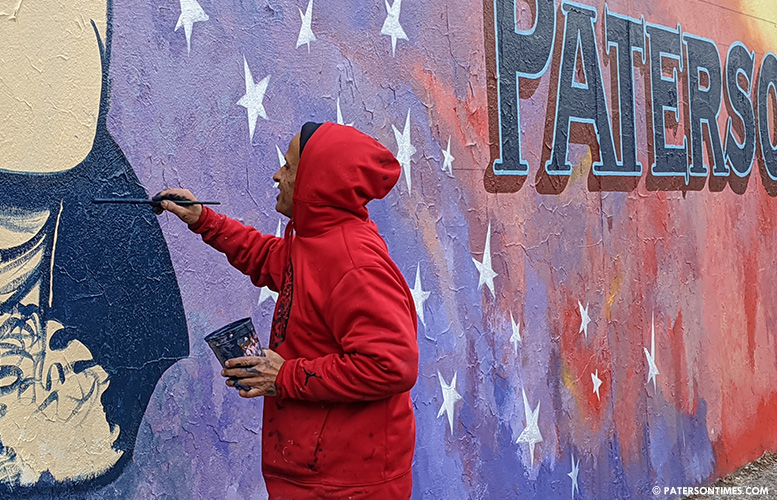 Artist David Thompson busily worked to finish the face of Alexander Hamilton on the side of the historic Hinchliffe Stadium on Friday morning.

Few steps away mayor Andre Sayegh and other officials held a press conference to unveil the mural in time for Hamilton’s birthday.

“We lost him at an early age. It was not natural causes it was gun violence. We’re still combating that to this day,” remarked Sayegh.

Hamilton picked Paterson as the place for the country’s first planned industrial city to wean the new nation off British manufactured goods.

Thompson continued to paint the approximately 40 feet by 25 feet mural while Sayegh and others delivered remarks. He said five artists spent six days painting the mural. The mural was commissioned by the New Jersey Community Development Corporation (NJCDC), he said.

Bob Guarasci, head of the NJCDC, said Thompson volunteered his services to do the mural. However, he said, his organization will extend him an $1,000 honorarium for his work. He said his group spent $500 on supplies such as paint.

Thompson has completed dozens upon dozens of murals throughout New Jersey. He was responsible for the mural of Larry Doby on the side of the stadium last year.

After the unveiling of the mural, Sayegh, Guarasci, and others gathered around a cake to sing “Happy Birthday” to Hamilton.

Thompson completed the face of Hamilton on the mural on Saturday.