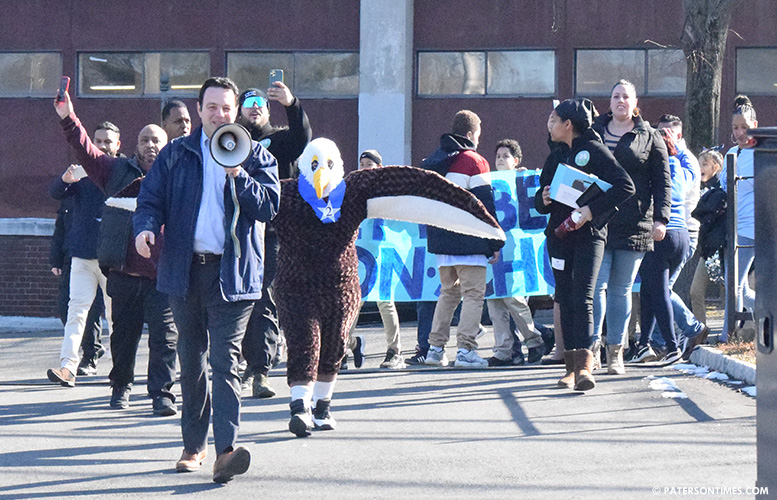 Mayor Andre Sayegh, armed with a bullhorn, led more than 100 people, including dozens of students from School 2, on a march to the Great Falls to kick off the Mayor’s Wellness Campaign on Friday morning.

Marchers, including municipal employees and residents, gathered in front of City Hall, then walked through Market Street led by the mayor and the school’s eagle mascot, ultimately ending their 0.8-mile or nearly 2,000 steps walk at the Overlook Park.

There Sayegh kicked off the Mayor’s Wellness Campaign. His campaign has six goals: encourage health screening for chronic diseases, promote community wide healthy nutritional choices, urge residents to engage in physical activities, discourage smoking and tobacco use among young people and push older people to cease smoking, discourage alcohol use, and promote strategies to reduce stress at home and work.

Sayegh said he picked up the program from the League of Municipalities. He came in contact with officials from the New Jersey Health Care Quality Institute which has been enlisting municipalities to improve quality of life in communities throughout the Garden State.

“How do we do this without any money, any injection of funds from the city?” said health officer Paul Persaud, a medical doctor, highlighting the biggest challenge to putting in place the campaign. His staff at the Division of Health will conduct daily blood pressure screening, body mass index assessments, give flu shots, hold Tai Chi workout sessions for residents and employees.

Municipal employees will receive exercise and healthy eating tips sheet with their pay stubs as part of the campaign. There’s also the Mayor’s Biggest Loser weight loss competition for government workers. Municipal employees will also be able to take part in 30 minutes of supervised physical exercise three times per week during work hours. A big component of the campaign involves educating the public on healthy living. Municipal officials are enlisting local businesses, like supermarkets, to discount healthy food items such as broccoli and green plantains.

“The program must be measurable,” said Persaud. He said each goal has built-in metric for measurement like participation in each of the initiatives under the Mayor’s Wellness Campaign.

If Paterson succeeds in implementing the initiative and produces results it could secure the designation of being a “healthy town.” DeSimone said last year 22 municipalities in New Jersey received the designation.

“At the end of the day, we have to be healthy,” said Oshin Castillo, health and human services director. “We need to make sure we’re a health community.”