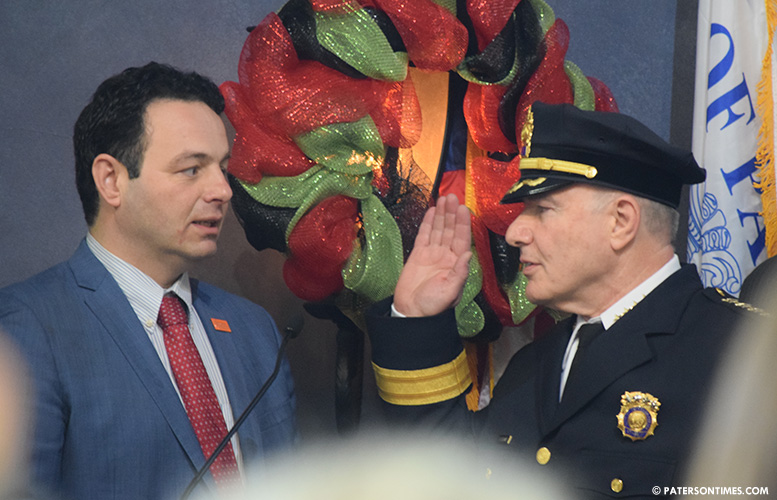 Ibrahim ‘Mike’ Baycora was sworn in as police chief on Tuesday afternoon, making him the first Turkish-American and Muslim police chief in the history of Paterson.

Baycora, who has 32 years of experience in the police force, was described as “humble” and “thoughtful” by men who have worked with him over the years.

“Paterson has been my home for the better part of half a century. Paterson has been in my blood my whole life and now to be its police chief after a 32-year career — what an honor,” said Baycora.

Born in Eskişehir, Turkey, Baycora was brought to the United States as an infant. His family settled in Paterson. He attended School 12, School 15, and Eastside High School. After high school, Baycora briefly attended Boston University, but had to return to New Jersey because it was too expensive. Baycora enrolled at Rutgers University and double majored in business administration and chemical engineering. He earned both degrees.

“We’re here to celebrate one of our own,” said mayor Andre Sayegh to a packed City Council chambers. “Ibrahim is a product of Paterson.”

More than 200 people from the city’s disparate ethnic groups that make up the Muslim community attended the swearing-in ceremony at City Hall. Many from the city’s Turkish-American community, largest in the country said the mayor, celebrated the ascension of one of their own.

Sayegh described Baycora as the embodiment of the American dream. He said Baycora is the first Turkish-American police chief in the United States.

Baycora outlined a simple plan for the police force. His goal as chief will be to get more police officers out into the streets, reduce operational costs, and implement more technologies for efficiency, he said. His plan also includes expanding the Narcotics Unit to target the drug trade and the gangs that run the illicit markets.

“This will help reduce crime, not only major crime, but quality life issues such as prostitution,” said Baycora. “We will also continue to expand our outreach into our communities as well as increase department transparency.”

Overall crime dropped 5-percent in 2019. However, shootings and homicides have increased.

“The thing that I have really come to admire most is that you are always thoughtful in deliberation, calm in the face of adversity and compassionate in your dealings with people. Each of those traits are admirable on their own merits,” said Speziale. “Collectively they’re reflective of the very qualities that define leadership. Great leaders are inspirational people. They have a uniqueness that sets them apart from everyone else.”

Speziale described him as a man of “undeniable strength, compassion, and unquestioned integrity.”

Baycora’s appointment as chief comes after the controversial ouster of popular police chief Troy Oswald. Sayegh and his cabinet members, business administrator Vaughn McKoy and chief of staff Kathleen Long, engaged in a bitter salary dispute with the former chief. Oswald sued naming all three in the lawsuit. His case was settled, part of the settlement included his forced retirement.

Both Sayegh and Oswald were allies until late 2018. So much so that Oswald was the architect of Sayegh’s public safety plan released during the mayoral campaign. Sayegh’s campaign did not release any other plans during that campaign.

Oswald was credited with dramatically reducing shootings and killings in 2018. However, both increased in 2019. He has also received praise for taking aim at corruption in the police force. Eight police officers have been arrested for violating people’s civil rights.

Council members have said Baycora has big shoes to fill.

“I’m all in and I will not disappoint you,” said Baycora, who previously served as deputy chief, to the mayor at the swearing-in ceremony.