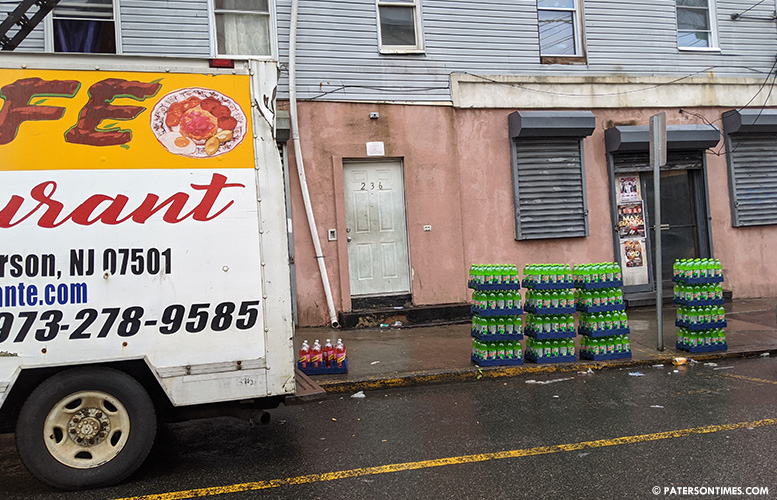 Controversial pastor Jesus Sevilla faced questions on Tuesday morning for loading crates of sodas received by his church from the food rescue organization Table to Table into a truck bearing the name of La Fe Restaurant.

Sevilla received a delivery of foodstuffs, including pallets of Mountain Dew, from a Table to Table truck at his Atlantic Street house at about 8:20 a.m., according to photos and videos reviewed by the Paterson Times.

A pallet of foodstuffs being unloaded at Sevilla’s Atlantic Street address from a Table to Table truck at about 8:20 a.m. on Tuesday.

Moments later, at about 10:30 a.m., a truck from La Fe Restaurant pulled up into Sevilla’s driveway. Good were loaded into the truck, according to neighbors. A reporter observed the vehicle exit the driveway and drive out of the area.

At about 11:07 a.m., a crew unloaded 16 crates of Mountain Dew bottles in the corner of 16th Avenue and Carroll Street. La Fe Restaurant at 124 16th Avenue sits at the intersection. Workers had a hand truck and were taking items from the vehicle into the basement of the restaurant.

“The guy sold the truck. He doesn’t own it anymore. It doesn’t belong to him anymore,” said Jesus Sevilla referring to the owner of La Fe Restaurant. “The truck belongs to someone else that has nothing to do with the business.”

Crates of Mountain Dew unloaded at the corner of 16th Avenue and Carroll Street.

Iglesia Dios is three blocks away from La Fe Restaurant.

When told the sodas were unloaded outside the La Fe Restaurant, Sevilla said, “Let me call and find out. He’s not supposed to do that. He is supposed to straight do delivery to the church between Park Avenue and Summer Street.”

Julian De La Cruz, owner of La Fe Restaurant, who spoke little English, denied the sodas were for his business. He said the sodas were for the church at 398 Summer Street. At about 12:30 p.m., La Cruz said the vehicle will be unloading the sodas at the Iglesia Dios. His restaurant truck was observed in the the church’s parking lot at 12:58 p.m.

Neither Cruz nor Sevilla could provide an explanation why the Mountain Dew crates were unloaded outside of La Fe Restaurant.

“We rely on the community to report to us if anything is occurring that should not be occurring. Obviously, we cannot be at every location and every place,” said Ilene Isaacs, executive director for the nonprofit Table to Table. “This is absolutely, completely not allowed. Every pantry or recipient that receives our food signs a contract that the food is solely for distribution to people in need.”

Isaacs said Table to Table is in process of removing Sevilla’s church, the Iglesia Jehova en el Monte Sinai, from the list of recipients.

Isaacs pointed out her nonprofit provides food assistance to many families in Paterson. Table to Table serves a dozen Paterson churches and nonprofit organizations, according to its website.

It’s not clear why Sevilla was receiving deliveries at the Atlantic Street address. His church and food pantry, both of which once operated from the address, were forced to relocate elsewhere. Neither the church nor the pantry had zoning approvals to operate out of the address.

“They can deliver to your house. You can receive anything you want at your house,” said Sevilla. He said he is not running a food pantry out of the address.

Sevilla also expressed displeasure at a reporter inquiring about the situation. “Paterson has a lot of troubles and issues. Worry about that. Don’t worry about little things,” he said.

Sevilla’s neighbors, who protested his church and food pantry for creating parking and traffic issues in the neighborhood, were not surprised.

“He’s supposed to give it to the poor people and a restaurant truck is picking it up,” remarked Albert Garcia, a neighbor. “With that guy there, I won’t be surprised. He does whatever he wants. He’s terrible for the neighborhood.”

Garcia said many of his neighbors are scared to speak up against Sevilla because of his political connections.

“The neighborhood had its suspicions, but for it to be confirmed is disheartening,” said another neighbor Karen Agosto.

When asked point blank if he is diverting goods intended for the needy to businesses, Sevilla denied it.