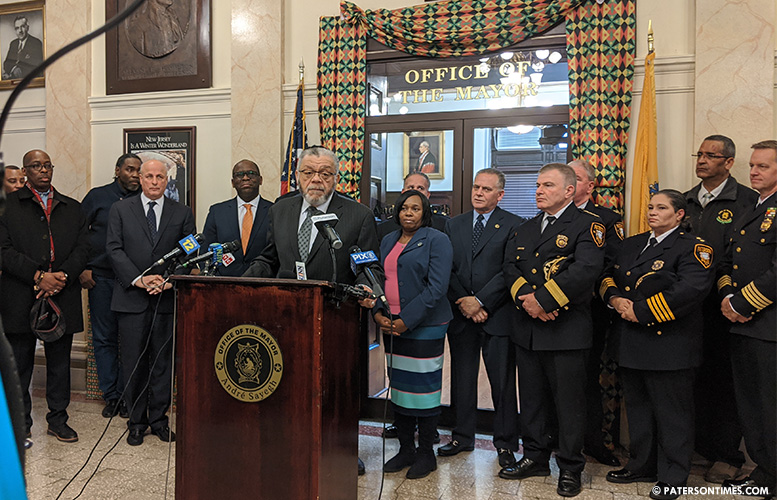 Ramsey and the team from the Police Executive Research Forum of Washington D.C. will examine police operations and organization structure, use of force procedures and training, and transparency and community relations.

“It’s about where are we now and where do we need to go,” said Ramsey (pictured at podium) in outlining the aim of the audit. Municipal officials said the audit is not a “gotcha moment,” but is intended to restore trust in the police force.

Sayegh proposed the audit in Jan. 2019 as part of his so-called tools of trust following the police-involved death of Jameek Lowery.

“I felt like this was arguably the most important tool within that toolbox as far as re-establishing that trust,” said Sayegh. “We’re turning the page on a new chapter in the Paterson Police.”

Police Executive Research Forum has conducted over 200 audits throughout the United States, according to its executive director Charles Wexler. The firm was awarded a $167,550 contract to conduct the audit last month.

“This city will not be defined by what happened last year. It will be defined by what you do into the future,” said Wexler. His firm will begin the audit in Mar. 1 and finish in nine months, officials said. “We will be objective. We’ll tell it like it is.”

Wexler said the Police Executive Research Forum will make recommendations as it identifies shortcomings within the department. Public safety director Jerry Speziale said the recommendations will be implemented with fidelity. A final report will be produced and presented to the City Council at the conclusion of the audit, according to officials.

Sayegh’s audit was opposed by popular former police chief Troy Oswald, officials said. Oswald, who is credited with the investigation that led to the arrest of eight rogue police officers, was forced into retirement on Feb. 1.

Oswald’s successor has no reservations about the audit.

“It doesn’t hurt to have a fresh set of eyes come and look at our department. We’re pushing for transparency. Our department is on board,” said police chief Ibrahim ‘Mike’ Baycora. He and his deputies were present at the mayor’s press conference on Monday afternoon.

Ramsey said the audit will also look at some of the outdated police practices in the department. Speziale last week told the City Council police recently began to type their incident reports.

“Change takes time,” said Ramsey, a renowned figure in the law enforcement community. “There’s not going to be some miracle overnight.”