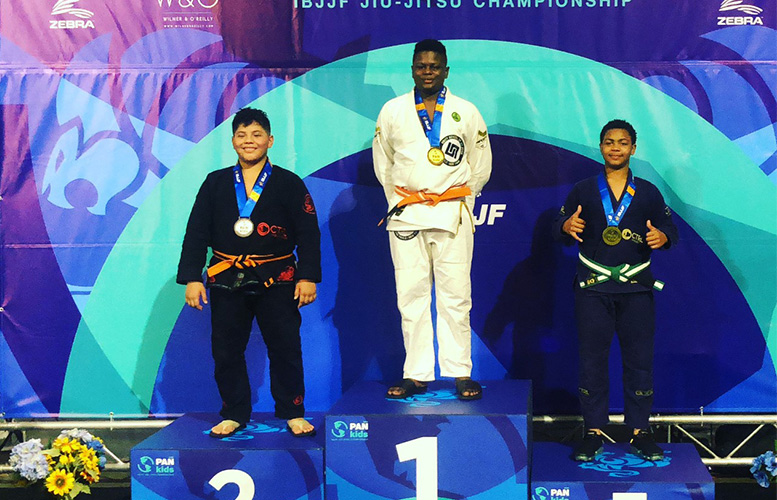 A pair of brothers known for bringing home gold from national and international jiu-jitsu competitions did it again. Jason Dixon and Jalen Mitchell returned to Paterson with gold and bronze medals from the Pan IBJJF Jiu-Jitsu Championship, biggest martial arts competition in the world for kids, held in Long Beach, Calf. last Sunday.

Dixon won first place in the Teen 1, Orange Belt, ultra-heavy category, earning a gold medal. His win was particularly gratifying because he had been out of the competition over the past two years due to an injury, said his father Naji Mitchell.

“What’s great about Jason is not only did he win it, he had to face a 7-time undefeated returning champion in the finals. It was a tough match and he didn’t shy away from it,” said the father.

Dixon, 12, is a seventh grader at School 25. He plays baseball during the spring and is part of the Paterson Eagles.

“I’m proud that he never gave up. There were times he was discouraged and thought he wasn’t good enough anymore after all the time he had to take off, but he dug deep and found the courage,” said Tracia Mitchell, the mother.

“I’m still really proud of him, to even do what he has done so far, medaling 4 years straight and winning it the 2 previous years is amazing. He had a tough loss to an old rival and talented opponent by a 2-0 score,” said the father. “I’m more impressed with his attitude after the loss. He’s a great sport and still had a smile on his face. He’s just enjoying the experience.”

Both boys will age out of the kids’ competitions in approximately two years, said the father. They will then start competing in the teen competitions.

The brothers will compete in the IBJJF American National Championship in Las Vegas in June.