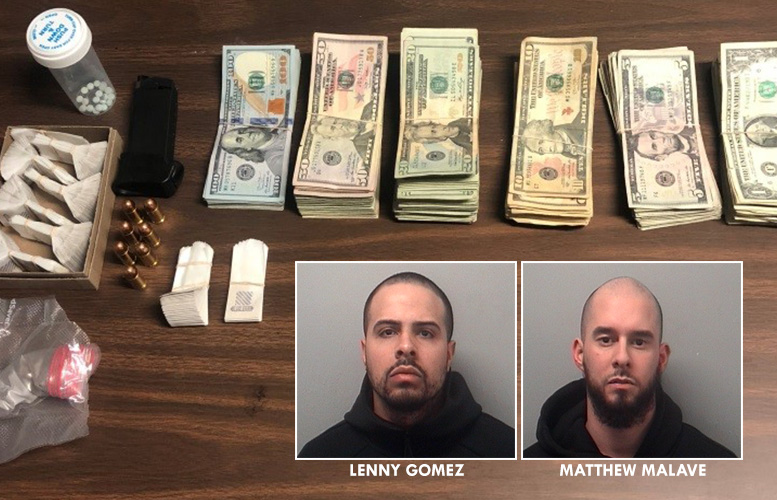 Observation of a hand-to-hand drug sale in South Paterson yielded two arrests, hundreds of bags of heroin, and more than $8,000 in cash on Friday, according to Passaic County Sheriff Richard Berdnik.

Lenny Gomez, 29, and ​​​​​​Matthew Malave, 29, both of Paterson, were arrested in the area of Main Street and Bloomfield Avenue. Detectives followed both men to the parking lot of Main Suds Laundromat. Gomez and Malave got into a black Acura. Detectives stopped the vehicle and saw several glassine envelopes of heroin on top of the center console.

Gomez, the driver, and Malave, the passenger, were removed from the vehicle and placed under arrest. A search of the vehicle revealed a hidden compartment inside the front passenger seat that had $6,710 in cash from alleged drug sales. Detectives also recovered 304 glassine envelopes of heroin, 20 Oxycodone pills, 26 grams of raw heroin, and a handgun magazine with seven rounds of .45 caliber ammunition.

Detectives recovered $1,413 in cash from Malave. Total drug proceeds seized in the bust is $8,123, Berdnik said.

Authorities said the street value of drugs seized is $4,400.

Gomez and Malave were each charged with drug possession, distribution, and distribution near a housing complex. Both are being held at the Passaic County Jail pending a court hearing.