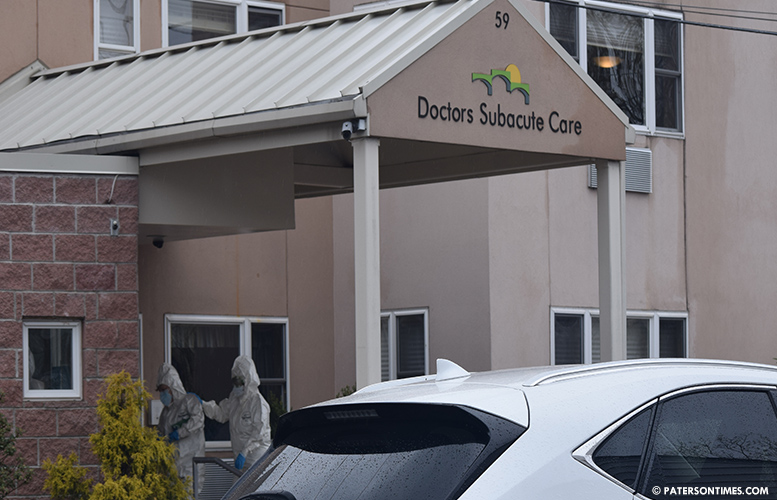 Municipal health officials conducted surprise inspections of two of the three nursing homes or long-term care facilities in Paterson to ensure each was complying with guidelines to curb the spread of the new coronavirus.

Health officials, wearing hazmat suits, inspected the Doctors Sub Acute Care on Birch Street and Complete Care at Fair Lawn Edge on East 43rd Street on Friday afternoon. The sole remaining uninspected facility is the Barnert Subacute Rehabilitation Center on Broadway which will be inspected at a future date.

“We paid a visit to nursing homes to make sure they are in compliance with the New Jersey State Department of Health guidelines on cohorting, control of respiratory virus outbreaks in long-term care and other institutional settings and the CDC guidelines on infection prevention and control for those with suspected or confirmed COVID-19 in healthcare settings,” said health officer Paul Persaud, who led the inspections at both facilities.

16 residents and 3 staff members at the Doctors Sub Acute Care tested positive for Covid-19. Residents include patients who tested positive before arriving at the facility.

The number of infections at the small facility alarmed the daughter of one resident.

“She’s not safe there,” said Lorena Ambrosio speaking of her 65-year-old mother Isabel Vera. Vera has been at the facility for eight months. The daughter has been attempting to get her mother out of the facility. “They have been giving me a lot of trouble getting my mother out.”

Yossi Czapnik, who runs the facility, and Shantel Rodriguez, who serves as the head nurse, did not respond to a call for comment.

Ambrosio said her brother signed the mother into the facility. The facility wants him to sign her out, she said. However, she noted a family dispute hasn’t helped the situation.

2 people tested positive at the Complete Care at Fair Lawn Edge which is much larger than Doctors Sub Acute Care.

No deaths were reported at the two nursing homes.

“We’ve been focused on the hospitals, but I know nursing homes are a concern as well. As someone who has a mother at a nursing home, I’m on pins and needles,” said mayor Andre Sayegh, who accompanied the health officer, the Strike Team, and fire officials at the Complete Care at Fair Lawn Edge. “A lot of these folks here live in close quarters, and it spreads quickly.”

The mayor has praised the Strike Team for its work during the pandemic. The team received valuable experience dealing with communicable disease – Meningitis and a Hepatitis A scares – last year. The team was strengthened last November with more training and better technology through a New Jersey Department of Health grant.