The number of people tested positive for the new coronavirus in Paterson increased by 38 to 5,650 while the number of fatalities from Covid-19 increased by one to 270 on Monday afternoon, according to municipal government data.

Council president Maritza Davila latched onto the mismatch between the city and county numbers last month to fan a faux controversy. She seemed confused about the numbers in two emergency meetings. She did not allow the city’s health officer to explain how the numbers are derived at the Board of Health meetings.

Davila did not respond to a call and message for comment on Monday evening.

Health officer Paul Persaud said the local numbers are the “closest to accurate.”

“Two Board of Health meetings were squandered over ‘numbers.’ It’s never too late to learn and time is a great teacher. The Paterson Communicable disease Strike Team will not be deterred and remains focused on reducing the spread of Covid-19 in Paterson,” said Persaud.

Passaic County’s datasheet lists infections from the state’s Communicable Disease Reporting and Surveillance System (CDRSS). These cases are investigated by the local Division of Health to weed out duplicates and out-of-jurisdiction cases. 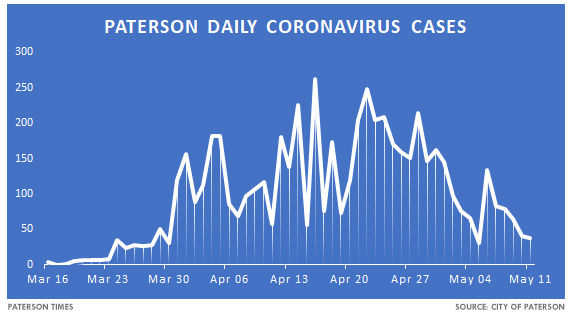 “Verified data is obtained after duplicates, negative test results, out of jurisdiction and invalid test results are removed from the crude data by the Strike Team members,” said Persaud.

The number of new daily infections in Paterson has been declining since May 1. The reduction in daily cases is largely attributed to social distancing and aggressive contact tracing by Persaud’s team.

The city failed to set up a testing site early on in the pandemic.

Mayor Andre Sayegh last week set up two non-governmental testing sites to screen residents for the virus. Despite increase in testing the numbers have continued to decline.