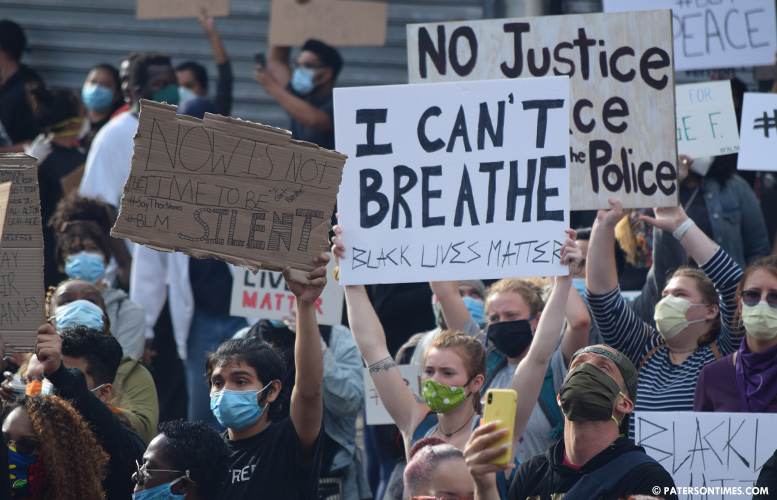 Hundreds of people chanted the name of George Floyd in front of the historic Danforth Memorial Library in Paterson on Tuesday afternoon.

Demonstrators, who filled the roadway in front of the library, wanted an end to police violence and racial inequality.

“No justice, no peace!” chanted the demonstrators. “I can’t breathe!”

Many held up signs that read, “I can’t breathe,” “Black Lives Matter,” “Prosecute the police,” and “Now is not the time to be silent.”

Thomas had the demonstrators take a knee – for eight minutes — for Floyd, a black man who died in the custody of the Minneapolis police on May 25. Police officer Derek Chauvin pressed his knee into Floyd’s neck for eight minutes as he pleaded for air, killing him.

Floyd’s death, captured on video, has sparked unrest throughout the United States.

Demonstrators also chanted the names of several Paterson residents, including Lawrence Meyers and Jameek Lowery, who died in interactions with police.

“For the white people in the audience. I’m glad to see you here,” said Shombay Burton, an organizer of the protest, to cheers from the crowd. “You can’t just show up and leave and that’s it. You can’t just show up and march with us and that’s it. We’ve been telling you for decades the police has been brutalizing us in our communities. Now that everything is on video tape you see the terrorism, murder, and brutality over and over and over again.”

Burton urged the white crowd members to weigh the words of black people and police “on an even scale” when serving on a jury.

Many of the demonstrators did not have masks and were not observing social distancing. 50-year-old Mega Dumber, who came to the demonstration with her daughter, kept apart from the crowd by climbing to the top of the library stairs.

Dumber held a sign that said there’s an epidemic of racism and police violence against black people.

A small segment of demonstrators tried to break away from the larger body prompting one of the organizers to intervene. The organizer told them to remain orderly and “organized.” 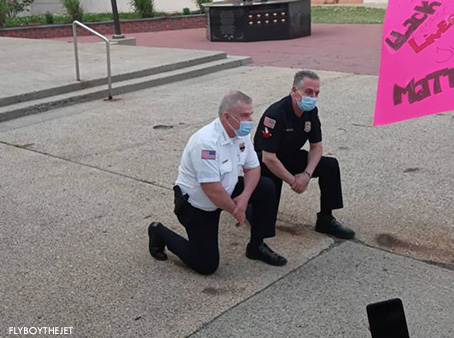 Merchants in downtown Paterson, fearing the protest will turn into a riot after nightfall, boarded up their stores.

The police station, the Frank X. Graves Public Safety Complex on Broadway, was also boarded up with plywood.

Public safety director Jerry Speziale, police chief Ibrahim “Mike” Baycora, and other officers took a knee in front of the protesters outside the complex. 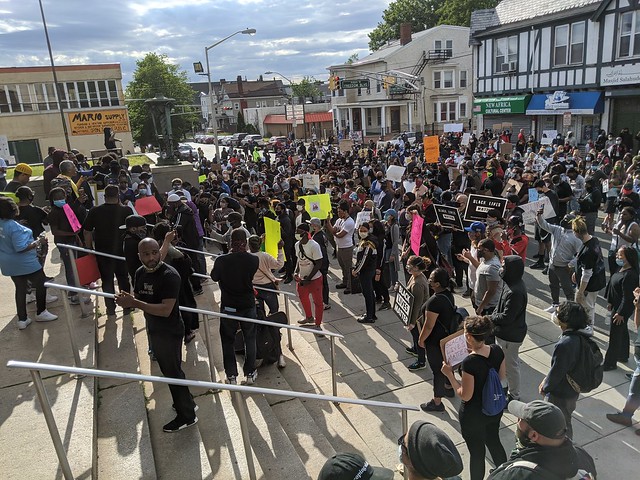