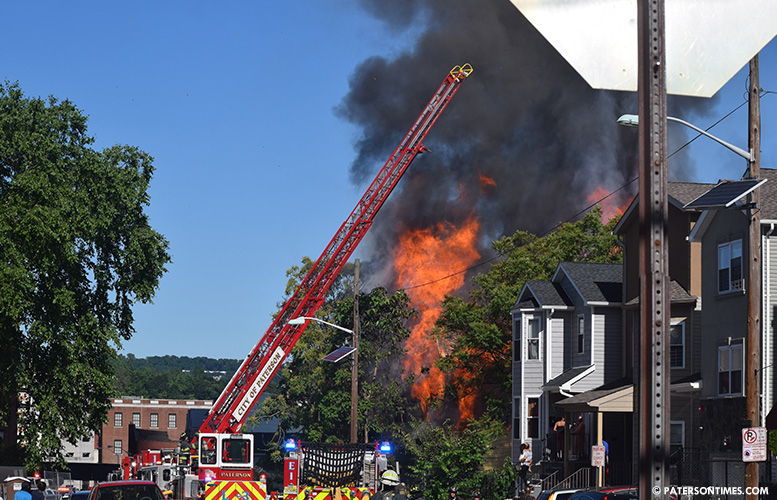 Second floor and attic of the structure at 153-155 Fair Street were fully involved when firefighters arrived at the scene just before 9 a.m., said deputy fire chief Frank Calamita. Heat from the fire could be felt across the street on Auburn Street.

A firefighter driving in the area called in the large blaze. Squatters were seen fleeing the burning building, said Brian White, who owns a property in the area. Fire officials received two reports of squatters jumping out of the burning structure.

“I knew this was going to catch on fire,” said White, who was at the scene on Friday. Abandoned buildings in the area, known for gun violence and drugs, are used by addicts to live in and shoot up heroin or other substances.

The buildings on the right, left, and rear of the fire building sustained radiant heat damage, said the deputy chief. But firefighters managed to keep the flames from spreading.

Two firefighters suffered injuries at the scene. Both were taken to St. Joseph’s Regional Medical Center for treatment.

One was treated and released and the other was still receiving treatment as of Friday afternoon. No civilian injuries were reported.

Calamita said there are still hidden pockets of fire at the building. He said the building has to be demolished. Once demolition is complete the fire will be declared contained, he said.