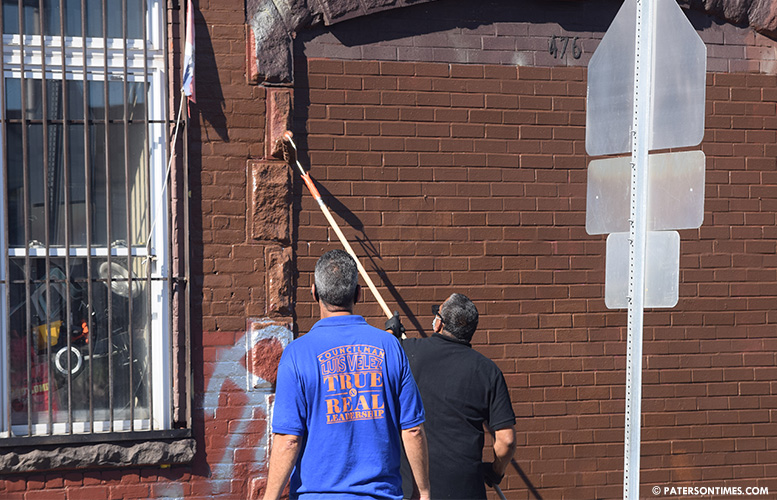 Councilman Luis Velez and George Anthony, a volunteer, were busy applying a coat of brown paint on a large graffiti at the corner of Market and Pennington on Friday morning.

Both men intend to paint over all brown and gray graffiti on both Market Street and Park Avenue, two major thoroughfares in the 5th Ward.

“It’s good for the community. It looks better,” said Anthony, a retired truck driver, who has spent his entire life in Paterson, after painting over a large graffiti on the building at 476 Market Street.

Velez said property owners are often afraid to paint over the graffiti. Graffiti is used by gangs to mark territory.  Some also use them to memorialize their slain fellow gang members.

“I’m afraid if I remove it, they are going to come after me,” Velez recalled a property owner telling him.

Velez said he is targeting the “really big ones.” He said it’s a three-day project to clear the large graffiti works from the business corridors of his political district.

“Thank you very much,” a man, leaving the nearby supermarket, told Velez for clearing the graffiti.

The graffiti Anthony painted over on Friday had marks that suggested the same area was cleared before.

“I did it two years ago,” said Velez. A pair of men gawked at the site of graffiti being removed from the site.

Velez urged them to tell off anyone they see defacing a wall. He pointed out it shows disorder and invites crime.

Velez said he has tried to get Public Works to paint over graffiti, but was told they can only do public properties.