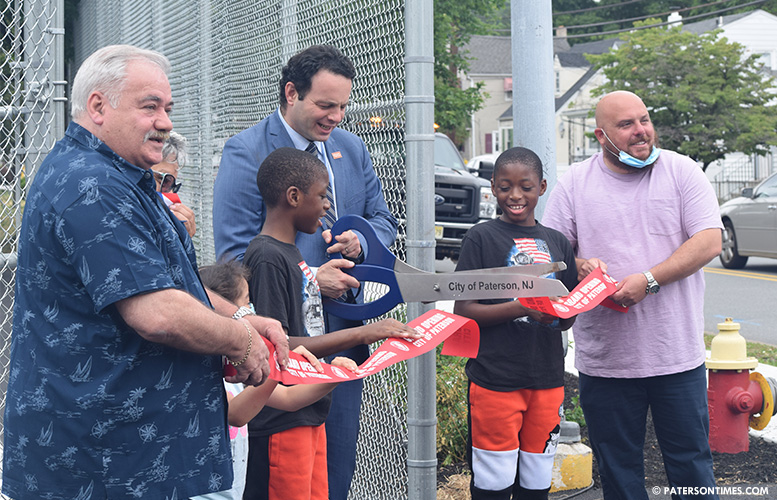 A renovated basketball court, an asphalt pathway, and a new handball court has opened at Buckley Park.

“We want the neighbors to know we take recreation very seriously. We want you to have top-shelf opportunities to play safely on a basketball court and a handball court,” said mayor Andre Sayegh standing in front of the renovated and fenced in basketball court.

The new court will be open for public use from 8:30 a.m. to 10 p.m., said public works director William “Billy” Rodriguez.

“It’s been a long time,” said Agostino Feola, Sr., director of the Paterson Police Athletics League, who runs a cadet program out of his building at the park. “Every single day these kids would come in here, ‘When are we going to put in the basketball court?’” Finally, we have it.”

Feola said 40 young people were eager to get on the basketball court last night. He had to tell them the grand opening isn’t until the next day.

These neighborhood basketball courts are where athletic dreams in the minds of young people take root, said Rodriguez.

More than a dozen forsythia shrubs were planted on the exterior of the basketball court to beautify the area.

“I’m always looking to shoot hoops, but it was never available to us. This is amazing,” said D’Andrea Watson, assistant women’s basketball coach at Passaic County Community College, who stumbled upon the ribbon cutting with her two cousins.

Watson, who lives a block from the basketball court, said young people in the neighborhood need something like this to keep their minds growing. She said once the Covid-19 crisis ends, she intends to take out permits to hold a game or two inside the new basketball court.

Officials did not have a basketball at the ribbon cutting. Then a boy, walking through the park, took a ball out of his backpack. The mayor, public works director, and several boys tried to shoot some hoops at the brand new court, mostly missing the shots.

Last year, municipal officials opened the renovated field at Buckley Park, a $1.37 million investment in the neighborhood, pointed out the mayor. 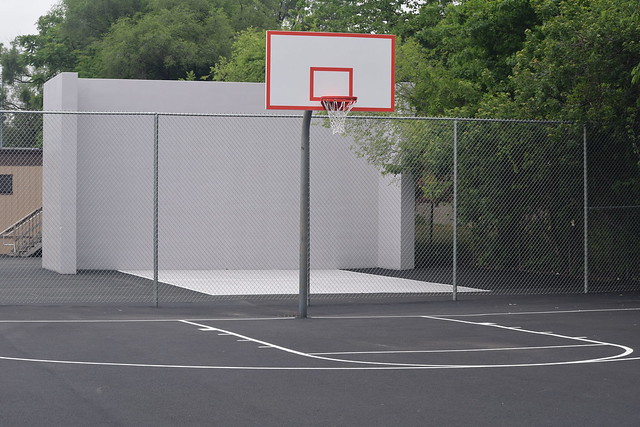