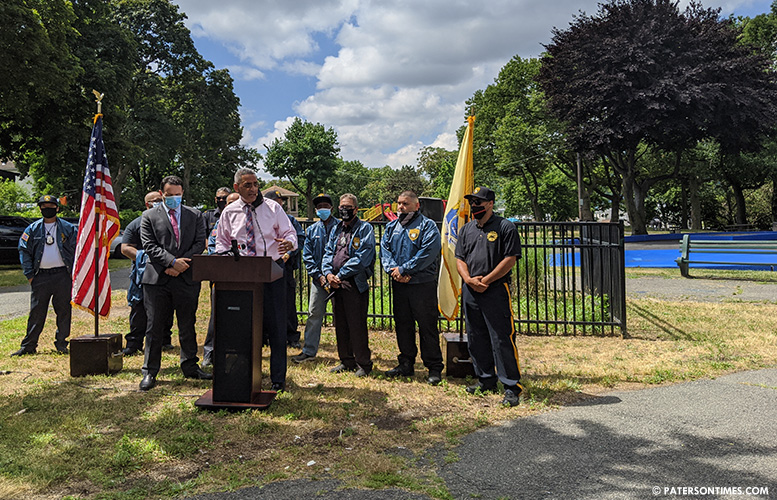 Several municipal parks will be patrolled by a dozen Passaic County constables during the summer to make residents feel safe, councilman Luis Velez and mayor Andre Sayegh said on Monday morning at the Roberto Clemente Park.

Velez said the constables will volunteer their time. He said Roberto Clemente Park on Market Street will be patrolled by constables for four hours from 5 p.m. to sundown on Thursday, Friday, Saturday, and Sunday.

“People that come to the parks will feel more comfortable and enjoy the parks,” said Velez, who spearheaded the pilot initiative.

Parks are there for residents to enjoy them. He said parks are not there for drinking, doing drugs, shooting fireworks, or playing loud music.

Velez is attempting to beautify the Roberto Clemente Park. A playground for autistic children is planned for the park, said the mayor.

“We know these parks will be safe places to play,” said Sayegh. He thanked Velez for coming up with an “innovative” way to make residents feel comfortable at the parks.

Roberto Clemente Park is in middle of the crime-ridden Sandy Hill neighborhood. The area is known for drugs, Latino street gangs, and violence.

Velez has said he is trying to change that by getting residents to take back their park.

Constables are appointed by the mayor and City Council members. About 10 constables stood behind Velez as he unveiled the new initiative.

Velez said constables will patrol the parks from beginning this Thursday through Labor Day.