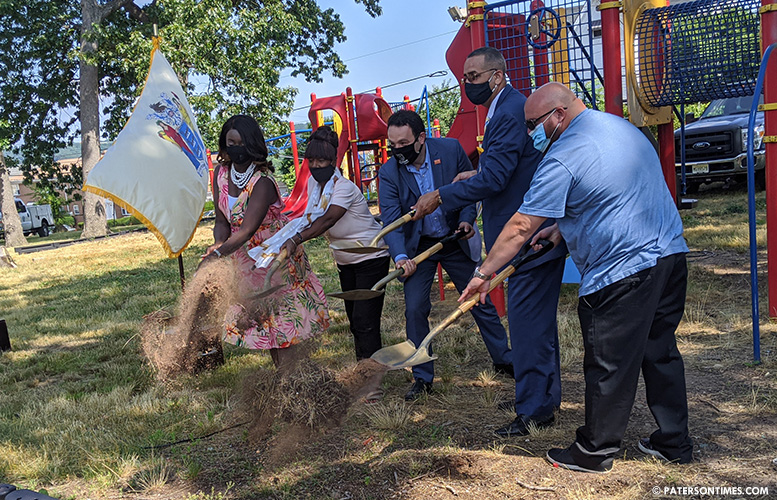 Mayor Andre Sayegh said the improvements will “resurrect” Baer Park. He said the park previously had syringes and liquor bottle strewn all over it.

A rendering of the new playground in the forefront as the mayor delivers remarks during the groundbreaking on Thursday.

Rodriguez said the half-dozen tree stumps, left behind after the removal of dead trees at the park, will be pulled out. He said the city will rent a machine to do that task. Officials said the city’s public works lacks a tree stump removing machine.

“This park was known for gang initiations,” said councilwoman Lilisa Mimms. “I promised this neighborhood we would revitalize it.”

Mimms urged the Sayegh administration to renovate the park. She has enlisted a funeral home across the street from the park and the Bronze Heat to oversee the park.

Adrian Ogando, who lives a block away from the park, brought his six-year-old stepson Ricardo, also known as “RJ,” to the park to play on Thursday morning. He said he was pleased to see the city is moving to renovate the park.

Ogando said he comes to the park just about every day. He usually brings one or both of his sons to play, he said. His second son is Adrian junior, he said.

The public works director said work on the park will begin in the next weeks. He said the improvements will be finished in early September.