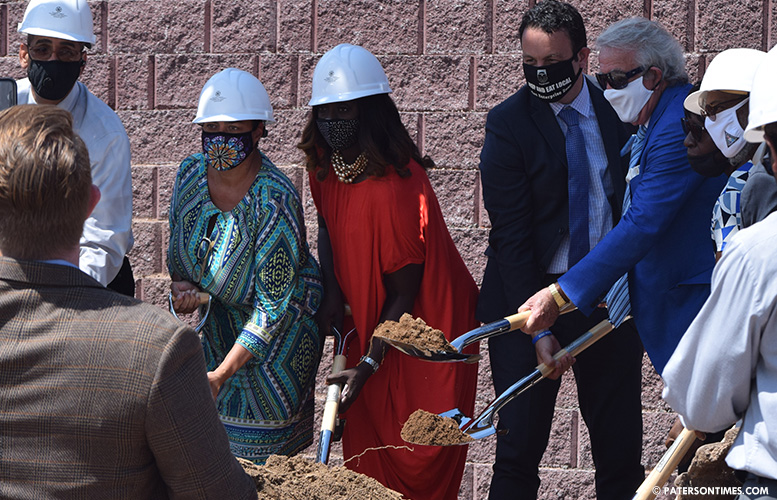 Municipal officials broke ground on the much delayed 245-unit townhouse development project at the former site of the Riverside Terrace on Wednesday morning.

Crews in hardhats were setting up foundations, building walls, and framing the structure while politicians were delivering speeches at the site on 5th Avenue.

“This will transform this neighborhood,” said mayor Andre Sayegh.

But his soaring rhetoric was undercut by a story in the Paterson Press earlier in the morning that highlighted Ray Ferraioli, who was involved in the mayor’s fundraisers in 2019 and 2020, had received work from the developer.

Roizman would not say how much money his firm is paying Ferraioli.

“Why’s that important? It’s not important,” said Roizman when asked about the contract amount at the groundbreaking. “I can’t do the things that he is doing; so, for the time he is spending, I will pay him. I don’t know what it is yet.”

“It’s disgusting,” said councilman Michael Jackson, who briefly attended the groundbreaking. He said he was disgusted by the deal between the developer and the housing agency. He also condemned the mayor’s fundraiser benefiting from the project.

Jackson, a critic of the mayor, has for years criticized the deal.

Residents of the now demolished Riverside Terrace will be given first dibs to return when the new development is completed, said Irma Gorham, director of the Paterson Housing Authority.

“Everybody will be offered to come back,” said Gorham.

130 families were relocated from the Riverside Terrace to make way for the demolition of the crime-ridden World War II-era housing project.

“It looks decent,” said Daquan Trent, who was among those relocated. He looked through the rendering boards set up at the site.

Trent, 30, plans to return once the new development is complete. He said he only lived at the Riverside Terrace for two years.

Former tenants and officials took bricks from the old Riverside Terrace as souvenirs.