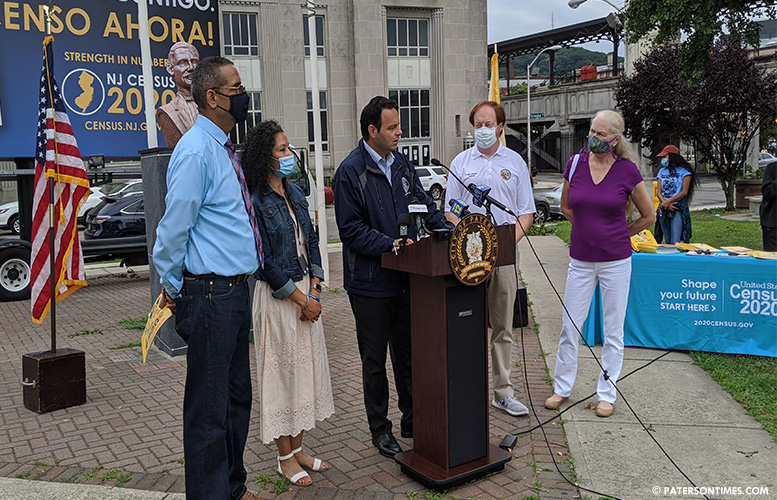 With just seven weeks remaining to get residents counted, Paterson and Passaic County officials are urging people to complete their U.S. Census surveys.

“We know that we have far more residents than what the Census told us 10 years ago,” said mayor Andre Sayegh, standing in front of a oversized Spanish-language billboard at the Juan Pablo Duarte Park that encourages residents to fill out their surveys, on Thursday morning.

Municipal officials swear Paterson has more than 150,000 people. But the U.S. Census from 10 years ago counted under 150,000 residents.

An under count will likely result in loss of millions in federal funds. Passaic County freeholder John Bartlett used a recent example to illustrate the point.

“That’s a tiny difference. But it made all the difference,” said Bartlett.

Bartlett has made it his aim to ensure Passaic County’s various ethnic minorities are counted. Passaic County produced videos in Spanish, Arabic, Bengali, and Gujarati to reach those communities.

Sayegh had hoped to exceed the 59.4 response rate set in 2010. His aim was to get as close to 70 percent as possible through a vigorous campaign, but all of that was upended by the new coronavirus.

Data shows the least affluent parts of Paterson were less likely to fill out and submit their U.S. Census forms.

1st, 4th, and 5th Wards have the worst response rates. 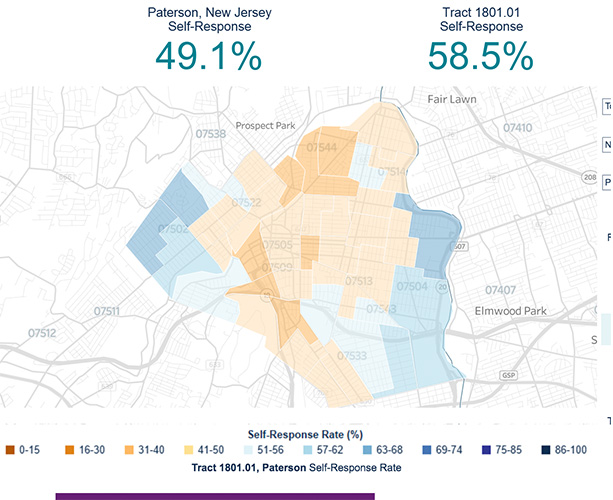 Sayegh said he intends to knock on doors to deliver Census masks and urge people to complete the surveys.

Councilman Luis Velez said he recorded a video in Spanish to urge his mostly Spanish-speaking constituents to fill out the surveys.

Beginning on August 11, Census workers will knock on doors in blocks with low response rates to get people to complete the surveys.

Diaz said officials need to urge residents to open their doors and cooperate with census takers. Enumerators will speak Spanish and other languages to communicate with residents who may not speak English.

Residents have until September 30 to submit their surveys, a month sooner than previously planned.

Officials slammed president Donald Trump for moving the date from October 31 to September 30.

Bartlett called it a “man-made crisis” designed to “shortchange” places like Paterson and Passaic County.

“They could cut the weeks but they’re not going to steal the numbers,” added Velez. “Against the wall, we will produce better.”

The mayor said it takes just 10 minutes to complete the survey.

“The Census only happens every 10 years. But it affects our lives for 10 years,” said Bartlett. “It takes 10 minutes to change the next 10 years of your life, your family’s life, your community’s life.”