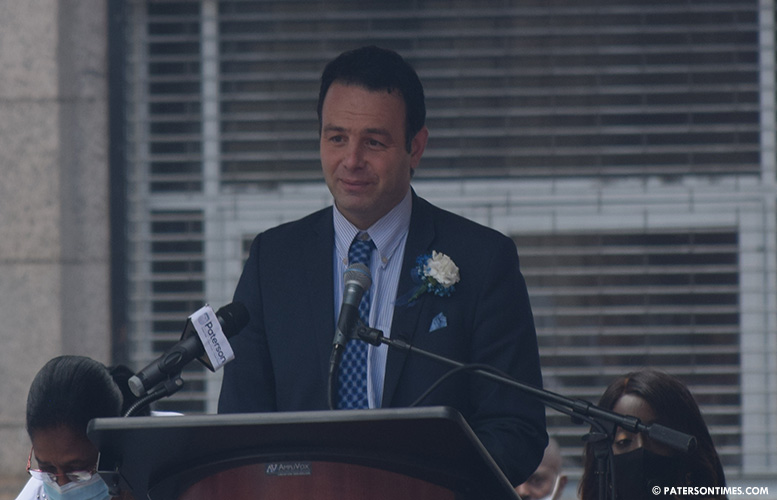 Mayor Andre Sayegh’s administration is looking to possibly impose a mandatory furlough that will run from October to March.

Employees are being asked to give up 13 pay days. Employees will lose one day every pay cycle. Furloughs will cover 11 Fridays and 2 Wednesdays from October 2020 to March 2021, according to the memorandum.

“We had to file notice pursuant to civil service rules, but by no means does that mean we’re going to be imposing a furlough,” said Sayegh on Wednesday morning. “This is contingent upon certain variables manifesting to avoid a furlough.”

Sayegh said the memo does not represent a final decision to impose a furlough. He said it’s a back up plan in case of revenue shortfalls.

Long’s memo states the temporary layoff in the form of a furlough is needed for “public health and safety due to the coronavirus pandemic” and “economic and efficiency” reasons.

Passaic County has allocated $8.53 million in federal Cares Act funding for Paterson to cover expenses incurred addressing the pandemic. Sayegh administration is nowhere near spending the full amount that expires at the end of the year, according to municipal and county officials.

Sayegh administration officials issued the memorandum without consultation with the City Council.

“Why now? I have a lot of questions for the administration,” said council president Flavio Rivera. “They have not had any discussions with us pertaining to any reasoning behind it — any financial reasons.”

Members of the City Council passed an introduced transition year budget earlier in the month. There was no mention of a furlough by Sayegh administration officials during the discussion on the budget.

Sayegh’s business administrator gave a presentation on the budget at the August 11 council meeting. Her presentation made no mention of a furlough.

“There should have been a conversation,” said council vice president Lilisa Mimms. Many employees live paycheck to paycheck and cannot afford to lose 13 days of pay from October to March, she said.

Mimms said council members were not informed of the furlough.

“Furlough was not in the budget plan at all,” said councilman Luis Velez. “It’s ridiculous. It creates worry [among employees].”

“Where’s the surplus?” asked Velez. He said the mayor told him switching from fiscal to calendar year would avert a furlough.

Sayegh said the switch to a calendar year gave the city “budgetary breathing room.” He said the city is in a better position because of that move.

“He’s like Donald Trump he forgot what he said,” said Velez speaking of Sayegh. He said Sayegh is running his administration like Trump is running the country.

Furlough will generate approximately $1.5 million in savings, said the mayor. It will spare police and fire. But that also limits the amount that could be generated through a furlough.

Sayegh said the furlough, if imposed, would cover himself and his cabinet members.

Sayegh considered layoffs and a furlough in 2019, but later scrapped those plans.

The mayor said his administration is closely monitoring revenues, tax and sewer collections. “If it goes well it will be less likely we’ll have to implement it,” said Sayegh of the furlough plan.