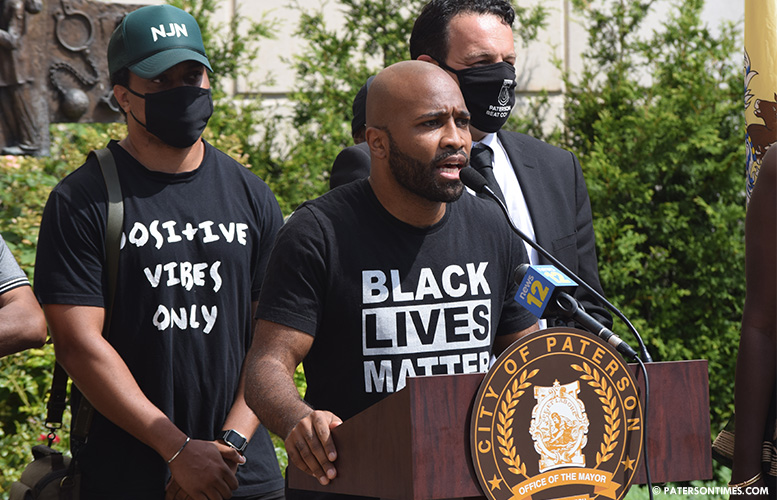 A two-block long Black Lives Matter mural is being painted on Broadway, steps away from the Paterson police headquarters.

“It’s already embedded in our hearts and minds. We wanted to embed it on the streets,” said Zellie Thomas (pictured), an organizer for the Black Lives Matter in Paterson, standing in front of the Underground Railroad Monument that sits on Broadway. “We’re standing at is an institution that was literally saving black lives. The abolition movement was the original Black Lives Matter movement. Without the abolitionist movement and the success that they had there would be no Black Lives Matter today.”

Mural will look similar to the one in New York City, said artist Christopher Fabor Muhammad. He said each letter will be 25 square feet. It will take 45 gallons of paint and two to three days to complete.

Muhammad expects the mural to be finished by Sunday. He said 20 people and local volunteers will work to complete the mural.

“Not only will it represent the pride that we have in being African Americans, it also speaks to justice, the pursuit of happiness, love, unity, and strength,” said councilwoman Lilisa Mimms.

Mimms said tax dollars are not funding the mural.

On Friday morning, volunteers were taking measurements and making marks on the roadway using chalk to start painting the massive mural.

“This mural will speak for itself and let everyone know Black Lives Matter,” said mayor Andre Sayegh.