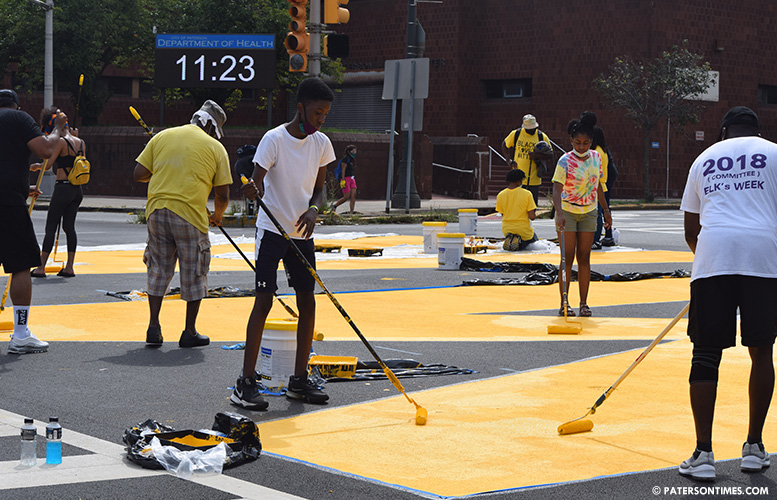 “Black lives matter, you know. We have to live and breathe,” said Miller, a student at School 30. “George Floyd didn’t have to die.”

Miller was among two dozen young people who took part in painting the two-block long mural in downtown Paterson.

“You have to teach kids at a young age that black lives matter,” said Zellie Thomas, an organizer for Black Lives Matter in Paterson.

Miller is among 22 youngsters enrolled in Raheem Smallwood’s six-week summer program. Youngsters learn about Black culture, history, and take steps to beautify their neighborhoods by cleaning up parks.

Smallwood tries to awake the youngsters to become change agents in their communities. 14 youngsters from his program took part in painting the mural.

“Just don’t settle for what is happening in our community,” said Smallwood. “We have to stop the violence against each other.”

Mural runs on Broadway from Church Street to Straight Street, where a memorial stands for the Underground Railroad. It begins a block from the Paterson Police headquarters.

Thomas said it took two months of back and forth to obtain approval to paint the mural. He said police opposed having the mural in front of the Frank X. Graves Public Safety Complex.

“It took a lot of pressure,” said Thomas.

Mural is aimed at police and the community, urging both to value Black lives.

“This is history. For me this is almost like attending the Million Man March,” said school board member Kenneth Simmons, who was pushing a roller soaked in orange paint on the asphalt. “I wish we had more students out here.”

Simmons’s colleague Emanuel Capers also took part in painting the mural. He also brought his one-year-old son, Emanuel Capers, Jr., to be part of it.

“It’s important to know he was here,” said Capers. He said his daughter, when she was very young, attended president Barack Obama’s inauguration. She had no idea about the importance of the event, but can tell posterity she was there when the county’s first Black president assumed the highest office in the land, he said.

Painting was organized in shifts to efficiently handle manpower and complete the project in three days. Each day, the volunteers painted a word on the asphalt. First day was Black, second day was Lives, and the third day was Matter. Each letter is 25 square feet.

No public funds were used for the mural.

On Sunday, the volunteers finished the mural by having all three words painted on the asphalt in orange. 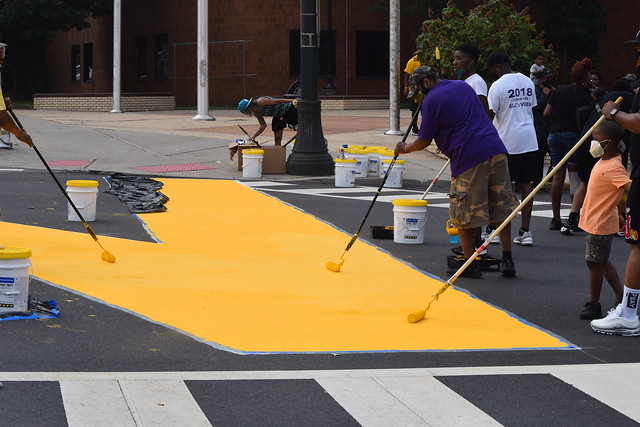