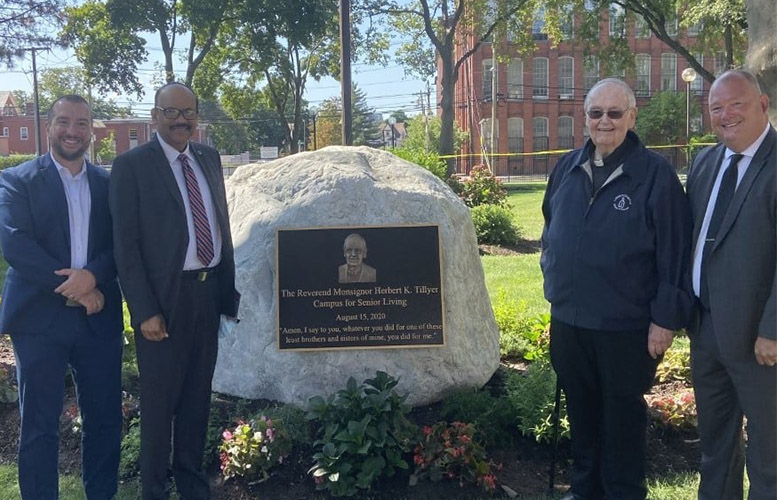 The massive Governor Paterson Towers have been renamed in tribute to monsignor Herb Tillyer, who has worked for decades to improve people’s lives in northern New Jersey.

“I am completely surprised and very humbled by this special honor given to me by the Riese Board of Trustees at the Governor Paterson Towers,” said Tillyer. “All of us work together to continue providing good, safe, and affordable housing to our seniors who are people of very modest means; we are privileged to serve them.”

Tillyer has served as a member of the Rise Board, body that governs the Governor Paterson Towers, for over 40 years.  He currently serves as pastor emeritus of the Saint Peter the Apostle Parish in Parsippany.

A stone with a plaque was unveiled at the towers renaming the campus to “The Reverend Monsignor Herb K. Tillyer Campus for Senior Living.” The campus, located at 211 20th Avenue, is made up of three buildings, 518 units of affordable housing for senior citizens.

Mayor Andre Sayegh said Tillyer’s work has improved the lives of many people in Paterson for decades.

“You have built the foundations for others,” added councilman Luis Velez.