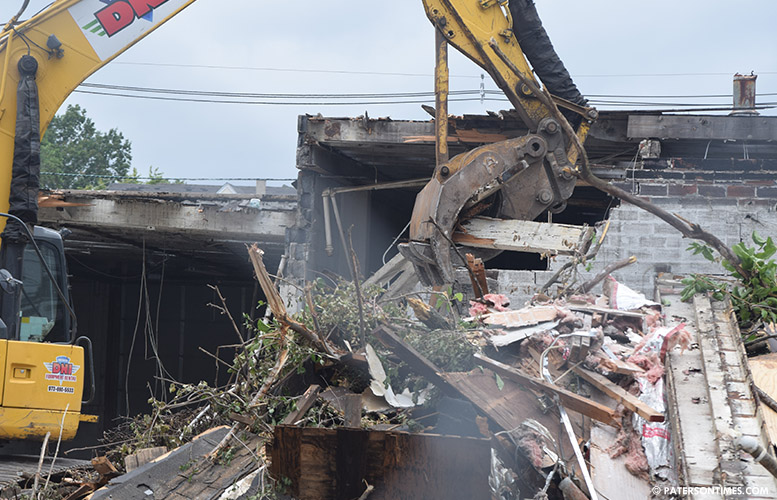 A large vacant building on the corner of 18th Avenue and East 30th Street that was being used by drug addicts to shoot up heroin is being knocked down.

“This was an eyesore,” said Eddie, a business owner in the neighborhood, who would not provide his full name for fear of retaliation. “I’m happy it’s gone. It’s better for the community.”

Eddie said squatters had taken over the building and were using it to shoot up drugs. “Countless” number of needles were found when contractors entered the building to clear it before demolition, said a member of the demolition crew.

“Sometimes I would come by and the door would be knocked in,” said Eddie. He said the building had been vacant since 2002.

“They would have killed themselves,” said the crew member. He told them, many of them pairs of men and women, to get help through drug recovery.

“There were a lot of people,” interjected Tajae Henriques, who lives nearby, speaking of drug addicts. He said they were there all hours of the day.

Councilman Luis Velez received complaints about the building at 480 East 30th Street. He contacted the property owner Anthony LoConte, a developer from Hudson County, who is attempting to build in Paterson.

“I said, ‘Listen Tony, this is an eyesore.’ He agreed,” said Velez. He spoke to the developer last Saturday. On Sunday, LeConte and Velez met at the site. On Monday, LeConte obtained permits to demolish the building, said Velez.

The demolition crew member said Velez assisted in speeding up the permit process. “Without the councilman that would still be here,” he said through the fence and yellow tape that cordoned off the demolition site.

Velez said LeConte intends to put up housing at the site. He said it will take about two years before the apartment complex, across from the old Pathmark, is built.