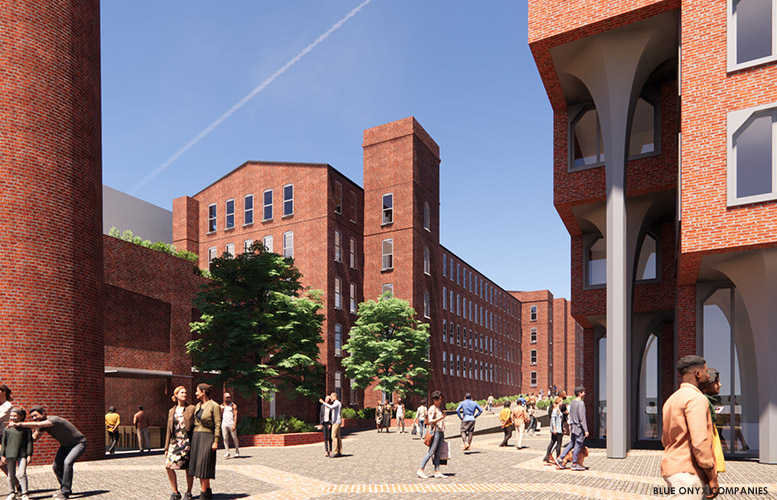 A beer garden, food hall, co-working space for startups, and housing will be developed as part of a $50 million adaptive reuse project at the seven mill buildings at 24 1/2 Van Houten Street.

“We envision this site as being a mixed-use development, a destination. We want it to be a place that attracts people,” said developer Levi Kelman, chief executive officer for Blue Onyx Companies. “We’ll build something that will have a lasting impact for everyone.”

Kelman has begun planning for the project to transform the derelict mill buildings. He said the project will take five years to complete. His firm is preparing to submit paperwork to the city for planning and historic preservation approvals.

Kelman expects to get approval from the planning board sometimes next year.

“For quite some time they have been fallow,” said mayor Andre Sayegh, who called Kelman a “developer with a dream,” during a news conference at the courtyard of the mills that was turned into a sandy beach with wooden beach chairs, yellow parasols, and colorful beachballs. “These are the before photos.”

“That’s an eyesore!” yelled a man sitting in a chair at the Lou Costello Memorial Park as people walked into the makeshift beach.

Sayegh said the building has been in that state for years. The site was developed in the late 1700s as a saw and grist mill. In the early 1800s, the buildings were turned into silk mills. The Fabricolor Manufacturing Corporation, a dye manufacturer, ran its operations out of the buildings from 1961 to 2002, the year the firm ceased operation and filed for bankruptcy, according to a case study commissioned the developer.

Levi Kelman at the podium during the news conference.

Blue Onyx acquired the property in December 2019, just six months after losing out on a development project close to the Ward Street parking garage to Hoboken developer Anthony LoConte.

Sayegh credited the developer for his persistence to do a significant project in Paterson.

Kelman said the project will have 180,000 square feet of space. There will be 60 to 100 apartment units. His focus is on hospitality and office space to bring jobs to the area.

“We’re sacrificing residential to bring people to the city to help the rest of the neighborhood,” said Kelman.

Kelman will build a new eighth building, he said. His firm, based out of Clifton, was founded in 2009. It has over 1 million square feet of residential and commercial spaces valued at over $100 million.

“We’re excited about creating a catalyst for renewal within this historic neighborhood in a way that celebrates Paterson’s entrepreneurial past while looking forward to a sustainable future,” said Kelman.