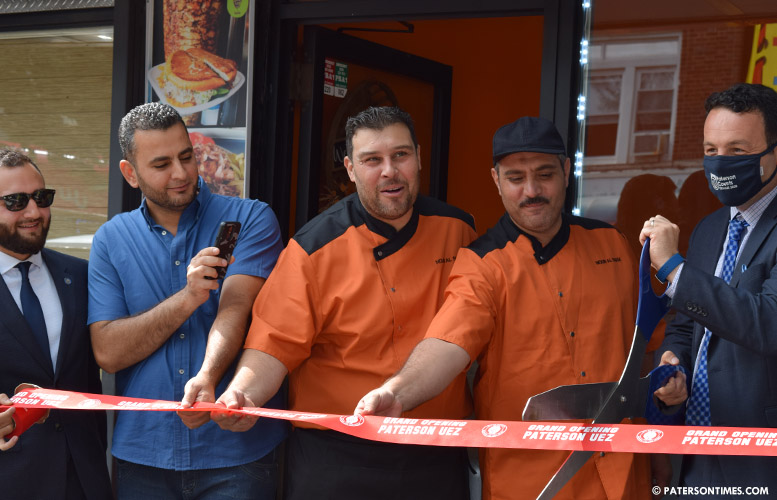 Mohammad Hlal, Diyaa Khatib, and Samir Alkhawalvan, who fled war-torn Syria and made it to the United States as refugees, opened their restaurant in South Paterson on Monday morning.

Their restaurant Nour Al-Sham has Middle Eastern favorites like shish taouk and shawarma. It also has French fries and burgers.

None of them ever imagined owning a restaurant in the United States.

“When they got here, they had no money in their pockets. But they had a dream,” said mayor Andre Sayegh before cutting the ribbon on the new business at 1136 Main Street. “It wasn’t easy when they came from Syria.”

The men had to learn English and adjust to a new life in the U.S.

“Everybody helped me from the first day I arrived here,” said Hlal, 38. “In Syria it’s very easy and simple life. Here it’s very difficult, but we have to learn to live here.”

Hlal was settled on North 6th Street, a street known for drugs and gun violence, after arriving in Paterson in August 2016. Before that, from 2011, he had been living in Jordan. He was shown the library and bus stops in Paterson. He worked as a helper on a food truck. He said he saved his tax refund check to start the business.

Khatib, 34, arrived in Middlesex County. He learned English at a church. He said all three men knew each other from Syria. His restaurant will serve “amazing food” that’s clean and halal, he said.

Sayegh said on Saturday the business, Nour Al-Sham, which roughly means the Light of the Levant, had a soft opening. He said the business ran out of shawarma because of high demand.

Alkhawalvan, 42, said his three sisters and father remain in Syria. He said he misses them.

The Syrian civil war has been raging since 2011. 585,000 people have died in the conflict, according to the Syrian Observatory for Human Rights.

Hundreds of Syrian refugees were welcomed in Paterson, said Raed Odeh, owner of the Palestine Hair Salon. Many were able to fit into the existing Middle Eastern community in South Paterson. In 2017, the Paterson school district provided counseling to three-dozen Syrian students.

Sikandar Khan, who played a key role in settling Syrian refugees in Paterson, said people often wrongly think refugees are a threat to the country and a burden on the system.

“They came here, and they built themselves,” said Khan. “Now they’re providing employment to individuals.”

The restaurant has three owners and five employees, said Khatib.

Hlal thanked the American people for taking them in.

“The people here, the American people, everybody, they helped us,” said Hlal. He and the other two partners recognized they opened their business during a pandemic. But they intend to make it a success.

“This is the American dream coming to life in the city of Paterson,” said the mayor.