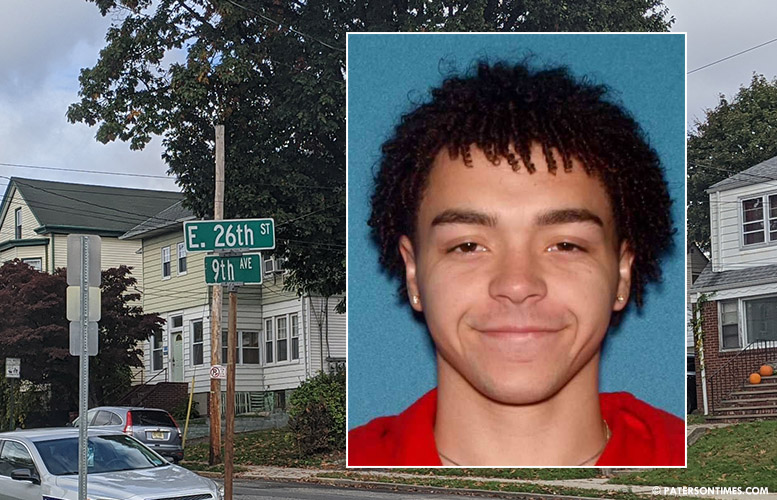 After dropping off his friend, 23-year-old Asante Cugliari of Wayne, allegedly drunk and high on marijuana, drove his 2013 Hyundai Genesis 63 miles an hour through a residential street in Paterson.

Cugliari rammed into a 2008 Dodge Charger driven by 58-year-old Gustavo Marte of Paterson at the intersection of 9th Avenue and East 26th Street.

Marte was instantly killed in the T-bone crash at about 9:55 p.m. on August 9.

No details were provided about Cugliari’s alleged conduct that led to the deadly crash when authorities announced the charges.

Kerrigan said Cugliari disregarded a stop sign before the crash. He was also driving 63 miles an hour in a 25 miles per hour zone heading towards the 10th Avenue circle at Route 20.

Cugliari’s attorney, Nicholas Palma, said his client did not see the stop sign. He also said one or two streetlights were out in the area.

Surveillance footage showed him at a “dead stop” while dropping of his friend on East 26th Street between 8th and 9th Avenue. Then he quickly, in matter of few hundred feet, three quarters down a city block, floored the gas pedal, reaching highway speeds on a residential street, said the assistant prosecutor.

Cugliari was injured and taken to St. Joseph’s Regional Medical Center. A blood sample taken at 3 a.m., five hours after the crash, revealed THC and alcohol in his system. His blood alcohol content was .075, below the legal limit of .08. But that’s because five hours had passed. Cugliari’s blood alcohol content would have been between .115 and .255 at the time of the crash, said Kerrigan citing a New Jersey State Police Laboratory analysis.

Gallucio asked about the delay in taking the blood sample.

Kerrigan said Cugliari was injured and had to get stitches before a blood sample could be taken. He also needed a CAT scan because of head injuries. “The first duty of law enforcement and first responders is to make sure that nobody’s injuries are made worse by the lack of treatment or delay of treatment,” he said. “Once his medical condition was stabilized, the blood sample was taken.”

Cugliari has been driving for five years and has a checkered record.

In March of this year, Cugliari was cited for speeding and careless driving. On October 3, 2019, Cugliari was involved in a car accident.

Palma said his client never received a ticket in that accident, suggesting Cugliari wasn’t at fault.

Cugliari received his first traffic ticket in 2016 for failing to observe a traffic control device. He was 16 years old at the time, said the assistant prosecutor.

Kerrigan said one would think his traffic history would put Cugliari on notice that “he needs to drive more carefully or he’s going to hurt someone.”

Cugliari did the opposite, said the assistant prosecutor.

“What he did again was travel at this excessive speed, essentially flooring his vehicle [accelerator] through a stop sign, through an intersection, after he had been drinking and using marijuana, and causing the death of this victim,” said Kerrigan.

“We all know marijuana stays in your system for five to six weeks. So that does not prove anything that he was smoking marijuana that night,” said Palma.

The judge asked what Cugliari was doing prior to the crash. Cugliari was at his girlfriend’s house in Wayne with his friend. At the house, both Cugliari and his friend, who he drove to Paterson, played video games, hung out at a pool, and drank White Claw, an alcohol-infused seltzer.

Palma said his client and his friend had a few drinks earlier in the day. He said those drinks were consumed at about 2 p.m.

Palma said Cugliari is not a flight risk. He also has a stable job history. He works as a car mechanic at the Route 46 Nissan in Little Falls, he said.

“If you took this kid more than 100 miles from his home, he probably wouldn’t know how to get back home, he’d have to call air-sea rescue,” said Palma. “There is no chance at all, whatsoever, that he will flee.”

Palma said his client surrendered to authorities soon after charges were filed.

Gallucio released Cugliari with conditions. She asked Cugliari how he has been going and returning from work. He told the judge he works Monday through Saturday. Since the accident his mother has been dropping him off and his girlfriend has been picking him up.

Cugliari is barred from driving a vehicle. He is also to be confined to his home. He is permitted to work Monday through Saturday at the car dealership, said the judge. He has to be home by 6:30 p.m. Monday through Saturday. If he works overtime at the dealership on Tuesdays and Fridays, he has to be home by 8:30 p.m. and provide documents to the court.