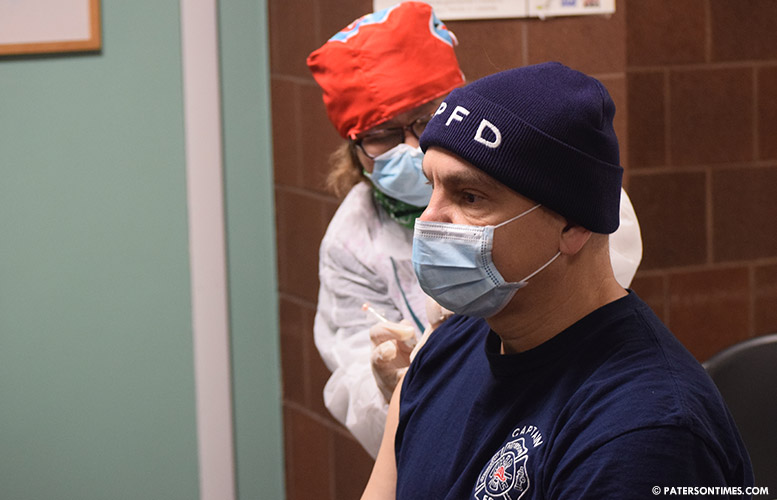 Fire captain William MacDonald, who also works as an emergency medical technician (EMT), always worried, during just about every ambulance run, about contracting the deadly new coronavirus and transmitting it to his family members.

MacDonald’s worries were somewhat lessened on Monday morning as he became among the first group of Paterson EMTs to receive the Moderna Covid-19 vaccine at the Division of Health.

“It’s mostly for my family,” said MacDonald (pictured), who has been working for the Paterson Fire Department for 19 years, just after a nurse administered the vaccine. “I’m not a big fan of needles. But it’s necessary.”

Just 56 EMTs agreed to take the vaccine, said fire chief Brian McDermott. A fraction of the total 340 EMTs. He said approximately 110 expressed interest in taking the vaccine, but half of them dropped off when officials moved to schedule them for vaccination.

“Not enough are getting one,” said McDermott. He urged first responders everywhere in New Jersey to get inoculated. “If we don’t get in this together then we can’t stop it together.”

McDermott became the second person in Paterson to get the Moderna vaccine.

“I had the coronavirus and it was horrible,” said McDermott. As EMTs responded to a heavy volume of Covid-19 calls during the pandemic there was apprehension and anxiety among the first responders. “Am I bringing this back to my family?” remarked McDermott recalling the concern that went through the minds of EMTs responding to calls.

McDermott estimated 30 EMTs will receive the vaccine on Monday.

Vaccine hesitancy has always existed, said health officer Paul Persaud. He pointed out some groups were opposed to the smallpox inoculation, the world’s first vaccine, after it was developed by Edward Jenner

“We know there are a lot of controversies today when it comes to vaccines,” said Persaud. He said the Covid-19 vaccines have been the subject of a great deal negative attention from people.

“I believe they are misinformed,” added MacDonald speaking of anti-vaxxers.

“We have a vaccine in record time. We trust the scientists. We trust those that worked on this vaccine. That’s why I’m going to be the first person to take this vaccine today,” said Persaud.

Persaud, who is terrified of needles, became the first person in Paterson to receive the Moderna vaccine. He also faced some challenges enlisting his staff at the Division of Health to take the vaccine. He said 10 employees opted to take the Covid-19 vaccine.

Persaud hopes his example will push others, particularly his co-workers, to get vaccinated.

Persaud said the city has the capacity to administer 200 vaccines per day right now. He intends to scale up to 1,000 per day when the vaccination center at International High School is set up next week.

“I was ready to roll up my sleeves literally, but I don’t fall into the 1a category,” said mayor Andre Sayegh. He falls in Phase 1b, which covers police, firefighters, and other essential workers.

Sayegh is eager for the shot to show people the vaccine is safe.

Meanwhile, St. Joseph’s University Medical Center, which administered its first vaccine on December 18, has been inoculating its staff. In the first three days the hospital managed to jab 1,500 staff members with the Pfizer-BioNTech vaccine.

Paterson did not have the extremely cold storage needed for the Pfizer-BioNTech vaccine.

Vaccine recipients were monitored for 15 minutes after receiving their shot. They have to get their second dose in late January of next year.