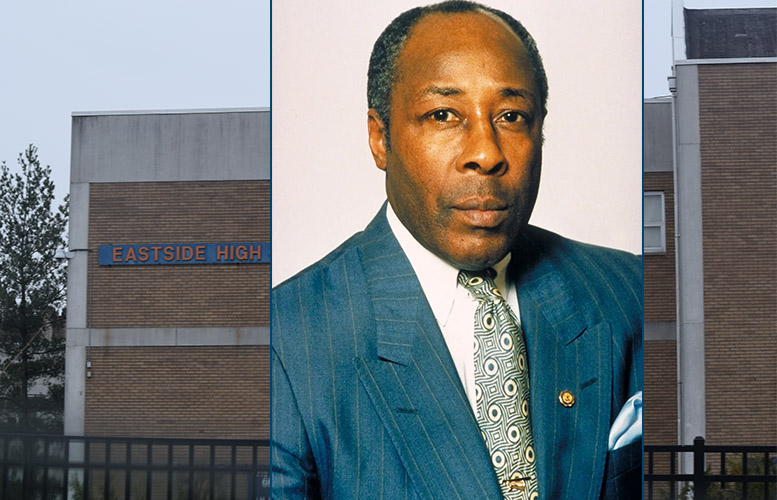 Joe Clark, who became a legend as the baseball bat and bullhorn-wielding principal of Eastside High School in Paterson in the 1980s, died on Tuesday.

Clark was 82. He died at his home in Gainesville, Florida after a long battle with illness, according to his family. They did not specify the nature of the illness.

Clark had been a resident of South Orange in New Jersey before he retired to Florida. He became a local legend in Paterson after his tenure at Eastside High School.

Clark demanded obedience through an autocratic approach. He was known for wielding a baseball bat and a bullhorn while patrolling the hallways of the Park Avenue high school. His work at Eastside High School was turned into a movie called “Lean on Me.” Clark was played by Morgan Freeman.

Clark’s exploits were covered in the national media. He received praise from president Ronald Reagan for his tough approach. He did not receive much praise from parents, whose kids he tossed out of the school (Clark threw out 300 students in his first year, 1982) or the school board, whose authority he undermined.

“I don’t just categorically extirpate young people out of school, but I am categorically emphatic that we cannot any longer condone hooliganism, aberrant behavior, deviant behavior in those schools,” said Clark in a CNN interview when asked about his practice of tossing troublemakers out of his school. “I’m convinced that young people, the vast majority, deserve the right to an environment that’s conducive to learning.”

Clark explained the students tossed out were “unproductive” adults — 18, 19, and 20 years old. He described them as “grown men and women that the system failed” by not providing alternative education for people who could not function in a traditional setting.

He had to deal with violence, drug dealing, and low-test scores in the school. Eastside High School continues to suffer from some of the same problems today.

Clark’s hardline approach irked the school board which drew up insubordination charges that were later dropped. He was ordered suspended in 1989 for allegedly arranging strippers to perform at a school assembly.

“I must state forthrightly that I am a benevolent dictator,” said Clark during the CNN interview.

Clark was born in Rochelle, Georgia on May 8, 1938. His family moved to Newark, New Jersey when he was six years old. After graduating from Newark Central High School, he obtained a bachelor’s degree from William Paterson University. He obtained a master’s degree from Seton Hall University and received an honorary doctorate from the U.S. Sports Academy.

Clark served as a grade school teacher in Paterson and as director of camps and playgrounds in Essex County. He then became principal of School 6. His family said he transformed the school from failing to the so-called “Miracle of Carroll Street.”

After he left Eastside High School in 1989, Clark worked as director of the Essex County Detention House, a juvenile detention center in Newark, for six years. He also wrote a book “Laying Down the Law: Joe Clark’s Strategy for Saving Our Schools,” chronicling his experience at Eastside High School.

“He was the best thing that happened to that school,” said Arlinda Crutchfield, who was a sophomore when Clark began his reign at Eastside High School, in an email after finding out about his death. “His methods were done out of love for the young Black community and they worked. He was so genuine. I will always remember how pleasant he was.  I looked forward to seeing him in the halls with his bull horn because everything time he saw me he called me by my name. I don’t know how he remembered it, but he did. I had such a good experience in high school, and because of him, I can say that I am proud to have went to Eastside!”

“His heart was for everybody to learn,’ said councilwoman Lilisa Mimms, who was a junior when Clark began his tenure. “He was for education for all.”