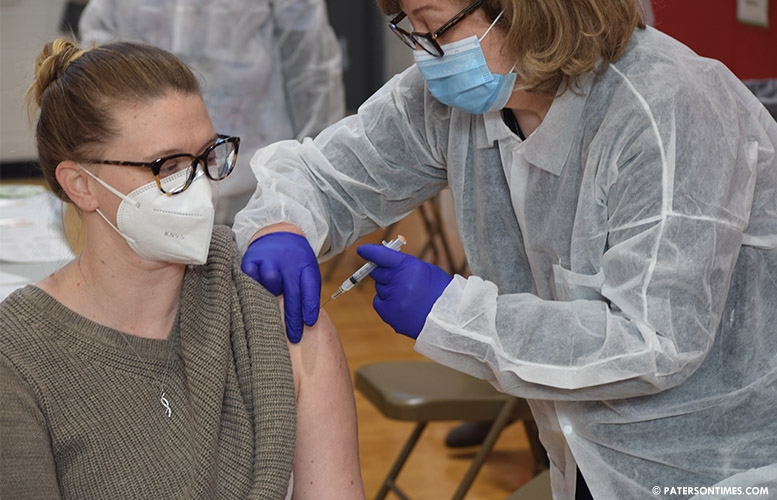 Municipal officials opened a Covid-19 vaccination center at International High School on Monday morning that can inoculate 1,000 people per day.

Five vaccination and two registration stations were set up in the gymnasium of the high schools. A line of few dozen people, mostly health care workers, formed outside of the building at 200 Grand Street.

“I want to encourage people to get vaccinated. It is a matter of public protection,” said mayor Andre Sayegh at the gymnasium. He said the aim is to administer as many vaccines as possible to move beyond the first phase and start inoculating the general public. “We want to move at a breakneck pace.”

Paterson began receiving the Moderna vaccines in late December. It quickly began to vaccinate health care workers, including emergency medical technicians, on December 28. Since then 300 vaccines have been administered. 300 are being dispensed now, said health officer Paul Persaud.

Health officials expect to get another 1,000 vaccines today or tomorrow, said Persaud.

“I did not want to keep vaccines on the shelf,” said Persaud. He said the five vaccination stations can be transformed into ten as demand increases.

Sayegh said he has been getting the word out to pharmacies and others in health care to get their vaccines.

“It was very easy,” said Danielle Long, a physical therapist, after getting the shot. From entering the gym, registering, and getting the vaccine took approximately five minutes for each person. Each vaccine recipient was monitored for 15 minutes after getting the shot for possible adverse reactions. “It didn’t even hurt at all.”

She has to return for the second dose in February.

Sayegh and Persaud said anyone, who falls in Phase 1a, can come to International High School to get vaccinated. He said they can also schedule an appointment by calling the Division of Health.

“We want you to come and get vaccinated,” said Sayegh.

Persaud said the vaccines will be administered six days a week at the International High School site.

The mayor also urged health care professionals to volunteer in the city’s effort to vaccinate people.

“This is our best option to get back to normal,” said Long (pictured).