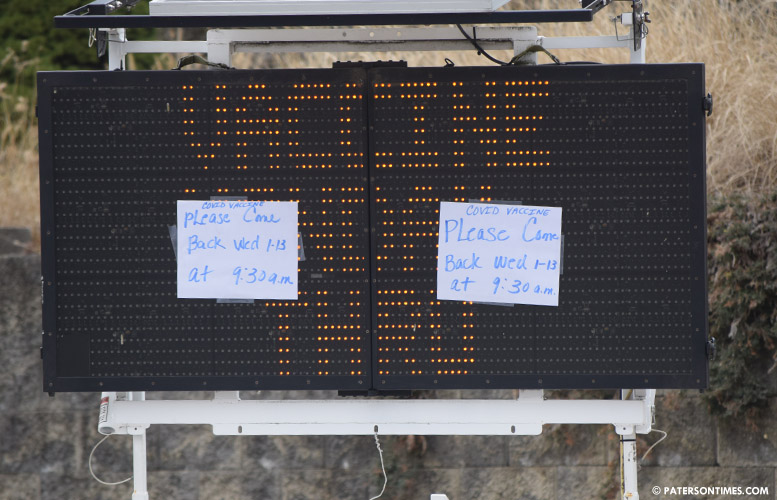 After running out of Covid-19 vaccines, the mass immunization site at International High School closed on Monday morning.

Signs posted at the site, including a digital billboard, tells people to come back for their shot on Wednesday.

Mayor Andre Sayegh said the city was forced to close the site because of lack of vaccines. He said he called the New Jersey commissioner of health on Saturday to alert her the city is short on vaccines.

“We knew we were running low on Saturday because of the long lines,” said Sayegh. Police officers and firefighters from all over New Jersey have been getting their vaccines at the Paterson site. He followed-up on Monday morning with the health commissioner, he said.

“We had 110 doses left and by 10.30 am we were done,” added health officer Paul Persaud, who is in charge of the vaccination site. “Our vaccination on demand program is working great. Hopefully on Wednesday we will resume administering vaccines.”

“At this times, vaccine supply is limited, and all of New Jersey’s weekly allocations have been distributed to be administered,” said Nancy Kearney, a spokeswoman for the New Jersey Department of Health. “Allocations are done weekly and are usually received at their destinations between Monday and Wednesday. Paterson’s allocation for this week is coming.”

Sayegh said allocation may be the culprit.

“What I’ve made a point in saying is that we’re doing so well with administering the vaccine. I feel like they should reallocate more to us,” said Sayegh.

Paterson received 1,600 Moderna vaccines in batches since December 28. It has administered all of them.

Persaud has said he does not want to keep vaccines in fridge shelves while the pandemic rages.

Paterson requested 4,000 doses, but is likely to get half of that this week.

Sayegh said the site would re-open after getting a shipment of vaccines.