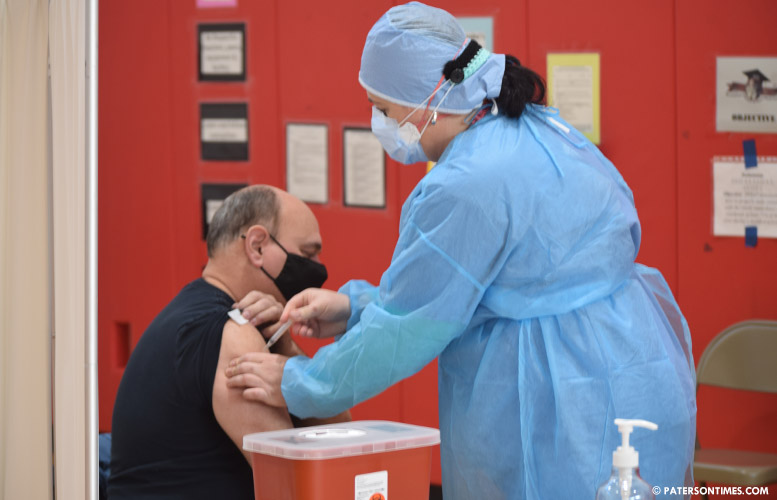 Mayor Andre Sayegh outlined a series of changes to the Covid-19 vaccination program in Paterson on Friday to reduce the long lines that have been forming outside of International High School as people from all over New Jersey rush to get vaccinated.

Sayegh sketched out a so-called “hybrid model” that involves people registering through the New Jersey Covid-19 registration and appointment system. He said appointments will be limited to Paterson and Passaic County residents.

Health officials in Paterson began administering vaccines on Dec 28, just before the launch of the state registration system. Officials said they had wanted to use the state system, but it was buggy and unreliable. Instead, health officials opted for a first come, first served system that worked efficiently until governor Phil Murphy expanded the vaccination eligibility criteria, leading to long lines at the International High School vaccination site. Some people set up camp with portable heaters and tents the night before to secure a spot on the line. Many who succeeded in getting a vaccine waited hours in the cold to get a spot on the line.

“We were vaccinating as many people as possible in New Jersey that was eligible,” said Sayegh at a press conference at International High School on Friday. The vaccination site was closed on Friday. Behind the scenes, city officials and school district officials scrambled to avoid canceling the press conference, said officials.

Sayegh came under fire from the Board of Health because of the long lines. Some people urinated on themselves waiting in lines, according to board of health members. Board members wanted an appointment system to reduce the lines. They also wanted Paterson residents to be given priority at the vaccination site.

“We’re not wild about just show up: first come, first serve. We’ve said from the get-go, we want this to be an appointment based system. We don’t want to see the scenes that we’ve seen in some other states,” said Murphy during a Covid-19 briefing on January 27.

Sayegh said the vaccination site will operate Wednesdays and Thursdays. Appointments will be covered from 9 a.m. to 2 p.m. He said an hour from 2-3 p.m. will be curved out for Paterson senior citizens on Wednesdays. He said local seniors can walk-in. Similarly, on Thursdays local seniors and people with underlying health conditions can walk-in to get vaccinated from 2-3 p.m.

“This is to accommodate senior citizens who may not be able to navigate the internet, may not be technologically savvy, may not have family members who can assist them,” said Sayegh.

Sayegh said Paterson will get 1,000 vaccines this week.

Previously, Paterson was getting 2,000 doses a week. The Murphy administration had reduced the shipments to 700 per week citing vaccine shortage.

Health officials said Sayegh’s changes does not affect the second dose recipients. People, who received the first dose at International High School, were given appointment cards with a date to return for the second dose.

“If you received your first vaccination here, you should come back here. Don’t go anywhere else,” said Sayegh. “We have set aside the appropriate amount of dosage for the number of individuals that got their first shot in Paterson.”

The appointment system for Paterson opened on Saturday at 1 p.m.