The city’s zoning officer, who had been under sustained criticism for not meeting residency requirement, has resigned.

Mayor Andre Sayegh’s administration hired Turi in 2018 to serve as the city’s zoning officer. He lacked the needed zoning experience for the job and did not reside in Paterson as required by ordinance. His job application also erroneously listed he was a resident of Paterson. Turi lives in Wayne.

Councilman Michael Jackson constantly criticized the Turi’s hiring. Earlier in the month, Jackson wondered how Turi could work in three towns – Paterson, Haledon, and Oakland – at the same time.

Turi left Paterson for Hackensack, according to an official.

After the demotion, the Sayegh administration tapped longtime employee Mario Lopez to serve as zoning officer. 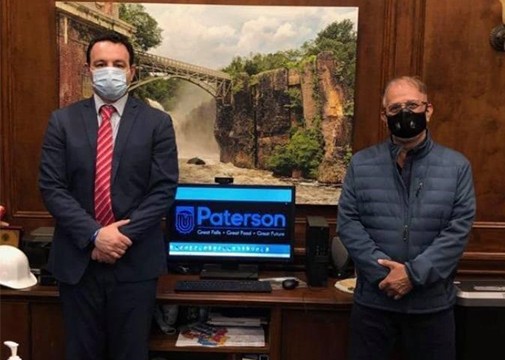 Sayegh and Lopez pose for a picture after the latter’s promotion.

Lopez and another former city employee Tyree Balmer had applied for the zoning officer job. Both men were deemed eligible by the state.

Lopez was picked as zoning officer after his attorney filed a notice alleging the city was discriminating against him. Similarly, Balmer, who is Black, also filed a notice, threatening to sue for discrimination. Neither have filed a lawsuit.

Lopez was demoted last month after a negative performance report.

Turi still served as the de facto zoning officer for the city. After his resignation, the city interviewed several internal candidates to appoint an interim zoning officer.

Economic development director Michael Powell said the city has picked Jesus Castro, who has been with the municipal government for almost four years, to serve as interim assistant zoning officer.