Councilman Michael Jackson threatened one of his City Council colleagues with physical violence via text messages and a phone call last week.

“You mention my son again and I will f— your bitch ass up,” read one text message Jackson sent to Velez.

Velez then called Jackson. He wanted to know if Jackson was behind the text messages.

“Yes, I sent that to you, mother f—er,” Jackson tells Velez on the phone.

“Let me tell you something. I swear to God…” Velez says in the call.

“Say the wrong thing. I’ll come to your house right now,” Jackson says in the call.

“I never talked about your son, man. I got kids too,” Velez says in the call. 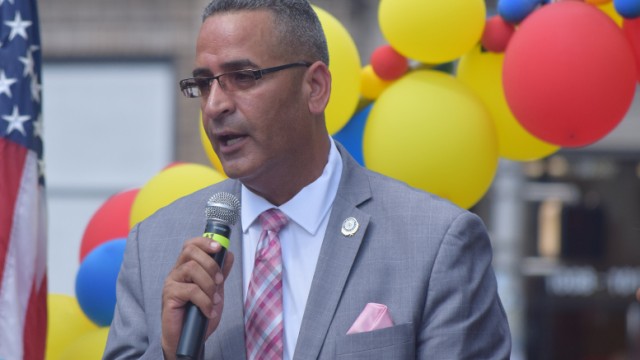 Jackson repeatedly tells Velez he is going to f— him up. He also threatened to f— Velez up in the City Council chambers during a televised meeting.

“What drugs are you using?” Velez says during the phone call. “Prove to me that I talked about your son.”

Jackson claimed Velez made “derogatory” comments about his son in front of a resident, Cameo Black, on the sidelines of the City Council meeting last Tuesday.

“I’m always nice and courteous to anybody’s kid. He had no right to mention anything about my son if it wasn’t going to be something positive,” said Jackson in an interview on Friday. “He said something that he had no business saying.”

Jackson would not say what exactly Velez said that was derogatory.

Black tried to recollect the conversation she had with Velez when Jackson’s son was allegedly mentioned.

“I don’t remember his exact words, but he mentioned Mike Jackson and his son,” said Black on Friday. “Something about what the hell does his son story got to do with your story.”

When told that does not sound derogatory or offensive, Jackson said, “That’s a matter of opinion.”

Black had told council members she was held at gunpoint during a frightening incident in Paterson. Jackson sympathized with her at the council meeting and shared the story of his son almost getting struck by gunfire.

She said Velez also said Jackson’s “ass” is going to jail and needs as many people behind him as he can get.

Jackson acknowledged he made the threats against Velez.

“I told him, if he mentions my son again, I will handle him,” said Jackson.

“I never said I was going to go to his house,” said Jackson. But he is heard threatening to visit Velez at his house in the phone recording.

Velez said he filed a police report. Police said the case has been referred to the Passaic County Prosecutor’s Office for investigation.

Police are conflicted out from investigating siting members of the City Council.

Municipal officials were shocked by Jackson’s threats against Velez.

“It is entirely inappropriate to threaten anyone, particularly with physical violence,” said mayor Andre Sayegh. “We have to conduct ourselves as professionals. People expect their representatives to be civil.”

Council president Flavio Rivera was particularly shocked by Jackson’s threat that he would attack Velez at a City Council meeting.

“It was disturbing to hear the things that I heard in that audio. It’s concerning,” said Rivera.

Some officials said Jackson is under immense pressure over the election fraud indictment and worried about him potentially engaging in regrettable acts.

Jackson said he is not concerned about any potential ramifications from a law enforcement investigation related to his threats against Velez.

“If you think that I’m concerned, more so about my public position than the safety and well-being of my family, my kids, then you’re mistaken. I don’t care about being elected more than I care about the safety of my family,” said Jackson.