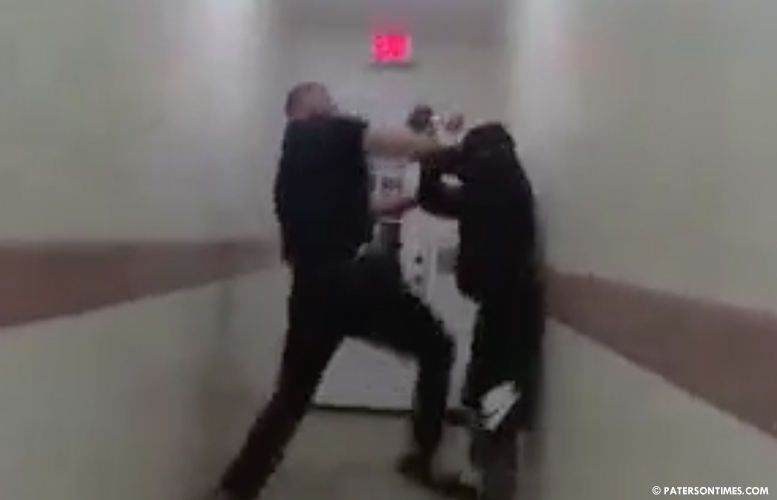 African American leaders on Friday called for the termination of a Paterson police officer accused of viciously attacking an upset father.

Police officer Spencer Finch, 44, of Mahwah, should be permanently removed from the police force, said the leaders, who were shocked by the video of the incident that was released earlier in the week.

“I think it’s appropriate to call for his termination,” said pastor Kenneth Clayton, who is also president of the Paterson NAACP. “The body camera footage clearly shows he was acting inappropriately. We have to have zero tolerance for behavior like this in our police force.”

Finch has been charged with official misconduct, aggravated assault, possession of a weapon for an unlawful purpose, and tampering with public records or information over the May 26 incident.

Mayor Andre Sayegh released the video of the incident on Wednesday. The Passaic County Prosecutor’s Office had declined to release the bodycam video in response to a Paterson Times request on June 16.

The video shows the victim in a narrow hallway, deep in an argument with someone about his children.

“It’s the third time she took my f—ing kids from me, man,” the man is heard saying in the video. “Why do you think I’m here like this!”

“Come on. Just relax,” an unidentified officer tells the victim.

“Dawg, are you a father?” asks the victim.

“No,” replies the officer.

“You’re not a father. You don’t understand, my nigga. This is the third time my kids have been taken from me.”

The officer allows the victim to vent his anger.

“Stop resisting,” a voice is heard saying in the video.

“I’m not resisting,” says the victim.

Finch allegedly filed a false police report to cover up his crimes, according to authorities.

“I am calling for termination,” said John Givens, pastor at the Shiloh A.M.E. Zion Church. “This is not his first episode. Should we wait until he kills somebody?”

Finch, who has been with the police force for almost 18 years, has been named in multiple police brutality lawsuits over the years.

“We want a message sent from the administration that they will not tolerate this type of action any longer. We want the immediate termination of officer Finch,” said Ernest Rucker, head of Save the Village.

Rucker attacked the practice of letting criminally charged police officers return to work after a 30-day suspension. He said that practice, outlined in the police labor contract, should cease.

The mayor said his administration is doing everything possible to “separate” Finch from the police force.

“This officer has been charged, suspended without pay, and the city is vigorously pursuing the avenues available to separate him from the police department,” said Sayegh on Friday.

“We don’t need any person with that kind of mentality on this police force,” said Jackson. He said the officer, who was initially at the scene, should be criminally charged as well for failure to intervene when Finch began to attack the victim.

But it was that officer’s bodycam footage that captured the attack which allowed the Passaic County prosecutor to file charges against Finch.

“How many times did this guy do this and it was never reported? I don’t think this was the first time. He was too comfortable,” said school board member Corey Teague.

Teague said Paterson has good police officers. Finch isn’t one of them, he said. Finch is the 11th police officer charged for violating people’s civil rights since 2018.

Finch spent five days in jail after he was arrested. Passaic County assistant prosecutor Peter Foy filed a motion to keep Finch in jail until the charges were resolved. A judge granted Finch release from jail after a detention hearing last Wednesday.

Finch’s attorney Anthony Iacullo could not be reached for comments for this story.