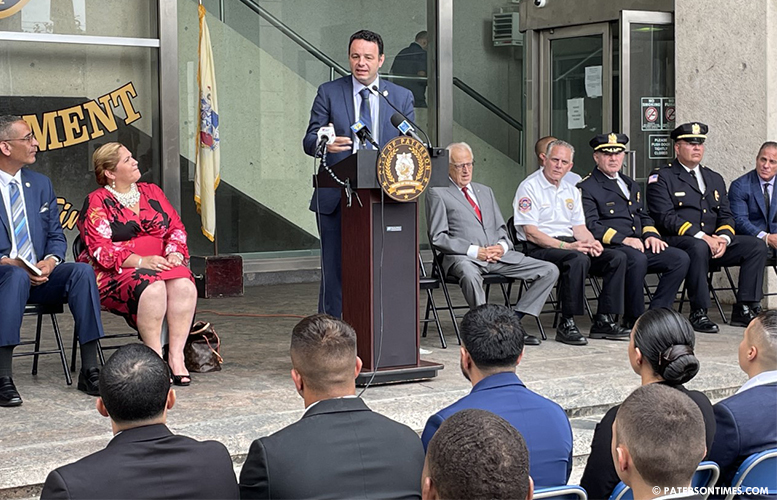 “Let’s be candid,” mayor Andre Sayegh suggested to the 27 men and women who took the oath of office in front of the Frank X. Graves Public Safety Complex, “policing is not the most popular profession. Yet you stepped forward. You still accepted the challenge to serve.”

The 27 new officers represent Paterson’s largest class of police recruits since the mass layoffs of 10 years ago, in which more than 100 cops lost their jobs. They will report to the Passaic County Police Academy on Friday to begin their training, and if everyone makes it through, Paterson will have 419 officers in uniform come graduation day in December.

Paterson had more than 500 cops before layoffs 10 years ago. Sayegh said the new hires are all being paid for through the city budget, and said the positions are all sustainable, given Paterson’s current financial position.

Hiring more cops is always a popular idea in Paterson—at least among most voters—so beefing up the department is something of a morale booster. Sayegh dubbed this class of recruits the “Ascension 27,” and said they were rising to a position of public trust.

Police work has never been easy, but in the aftermath of the murder of George Floyd, it has never been more closely scrutinized. While Floyd’s murder in the hands of Minneapolis police awakened much of the nation to the reality of police brutality, Paterson cops have frequently come under scrutiny for their rough, and occasionally deadly, responses on the street.

Just last week, Sayegh began the process to terminate Paterson cop Spencer Finch, an 18-year veteran of the department who was seen roughing up a city resident in the hallway of an apartment on May 26. The altercation was recorded by a bodycam, and Finch was subsequently charged with assault, official misconduct, and filing a false police report.

Finch is the 11th Paterson police officer to be criminally charged over the past three years.

Although Sayegh never mentioned Finch by name, he and others who spoke at the ceremony tried to drive home the point that good cops make for good community relations. And without good cops, the fight against crime is lost.

Paterson police director Jerry Speziale implored the recruits to “hold yourself to the highest standard of our expectations….and to live your lives…both publicly and privately…in a way that neither demeans nor betrays the very trust that’s been placed in you.”

“For the police to have any authority at all over the community they serve, the people must believe that your motives remain principled and your character remains unquestioned,” Speziale said. “You establish that legitimacy in the eyes of the public by remembering to treat others as you would want to be treated, by being firm yet fair, and by letting your decisions always be guided by that which is honorable.”

“Despite what many read, and many have seen, this a great city,” Pascrell said. “I have faith in the department. There is a sense of resiliency. They can do the job.”

However, Pascrell warned that the continued erosion in public confidence in the police, both in Paterson and across the country, puts the nation on a dangerous path.

“If you don’t interact with the community, we’re done,” Pascrell told the recruits. “Or else, we have a police state. Do you want that? Do want to live in Russia? Do You want to live in China?”

Three members of the City Council– Maritza Davila, Lilisa Mimms, and Luis Velez — joined Sayegh on the dais as did Paterson police chief Ibrahim “Mike” Baycora and Det. Jose Torres, the president of the Paterson PBA.

But ultimately, the day belonged to the recruits and their families. Guillermo Mallqui was all smiles as he snapped a picture of his daughter, Sharon.

Mallqui, a Paterson native, said she got her degree in Government Studies at Montclair State University and decided to join the police department. What appeals to her about a job that can be so difficult and dangerous?

“The adventure,” she said. “I am willing to take the risks. And there’s always something new coming up. Every day is a new day.”