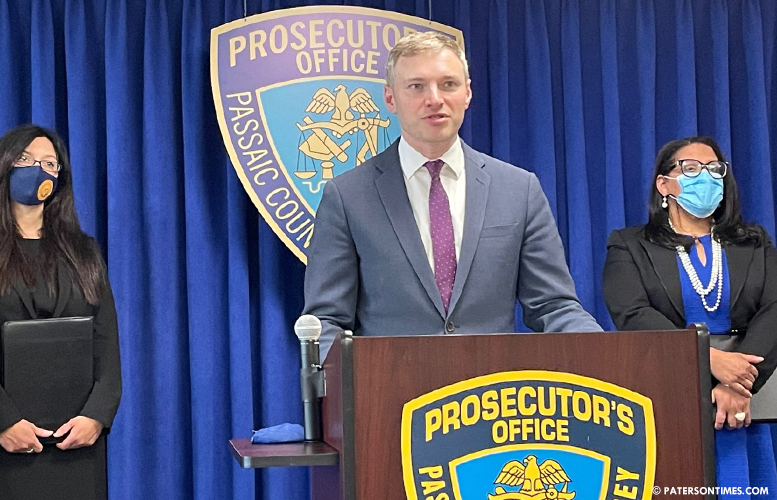 Bruck, in his first press conference since being named acting attorney general, came to the Passaic County Prosecutor’s Office on Thursday to announce the takedown of the 400 Block set of Trinitarios, the Dominican gang caught up in the violent drug war in Paterson.

“In the coming months, you are going to be hearing from us a lot more,” Bruck said, adding that the Trinitarios operation was one facet of a multi-prong effort aimed at reducing gun violence.

“It is targeted,” Bruck, pictured, said. “We are not locking up individuals indiscriminately but focusing our operations on the criminal organizations and criminal activities that present the greatest threats.”

And, in an effort to get guns off the street, the state is conducting a one-day gun buyback program on Saturday, Aug. 7. The state will buy back firearms for $250, “no questions asked,” Bruck said.

In Paterson, St. Luke’s Baptist Church on Carroll Street and Gilmore Memorial Tabernacle on Haledon Avenue will be drop-off points for the gun buyback.

Gun violence and homicides in Paterson are both ahead of last year’s record-setting pace. According to the Passaic County Prosecutor’s Office, through July 19 there have been 65 shootings and 98 victims. Last year at this time, there were 41 shootings and 71 victims.

While it’s not clear whether the spike in violence is pandemic related, Passaic County Prosecutor Camelia M. Valdes said it matters little to law-abiding citizens.

“People don’t want to hear it’s because of the pandemic,” Valdes said. “They want to know what we are doing about it.” Valdes said recent collaborative efforts between federal state, county, and local law enforcement have yielded results. She pointed to a the recent Operation Silk City in which U.S. Marshals rounded up 133 fugitives in Passaic County, many of them violent offenders.

The Trinitarios bust is the result of an eight-month investigation Paterson police with an assist from the state.

“Communications were intercepted during the course of this investigation made clear these men we have just arrested allegedly bound themselves to further their drug distribution business and to defend their drug territory that covered 10 blocks of this city,” said Lyndsay Ruotolo, the new director of the NJ Division of Criminal Justice.

Landrau was shot four times on June 20 but survived. Detectives subsequently intercepted a phone call in which Polanco allegedly threatened retaliation to a rival gang member. A recording of that conversation was played at Polanco’s detention hearing on Wednesday, authorities said.

“People want war, so we going to have war,” Polanco is alleged to have said.

Cops also seized five handguns, six high-capacity magazines, and over 800 rounds of ammunition in a series of raids at locations linked to the Trinitarios. Also seized were 40 bags of heroin, five ounces of cocaine, 40 vials of crack cocaine, 60 Oxycodone pills, 22 Percocets and 10 Xanax, authorities said.

Of the 14 alleged Trinitarios charged, four remain at large. The attorney general’s office identified the fugitives as Gregory Polanco, 28, of Haledon; Kreemlin Alcantara, 22, of Paterson, Adrian Eyzaguirre, 31, and Mike Martinez, 30, both of Clifton.