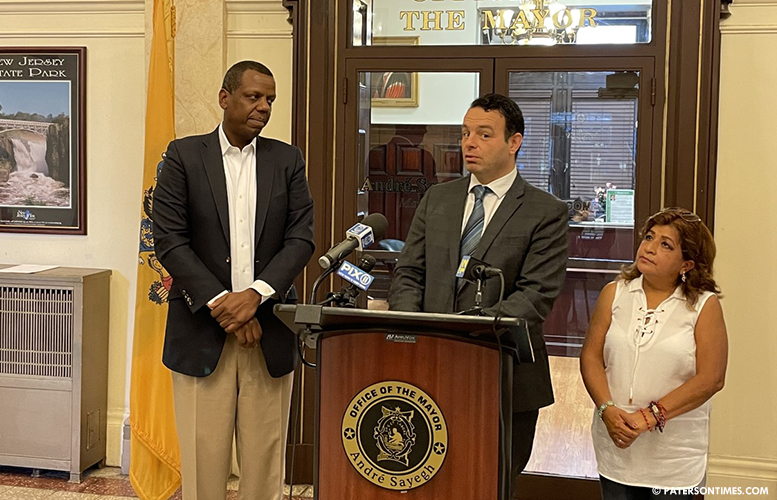 Debit cards worth an initial $400 have been mailed to the 110 lucky Paterson residents selected to participate in the city’s first Guaranteed Income Pilot program, the first of 12 monthly installments that puts cash into the pockets of poor people in the fight against poverty.

Mayor Andre Sayegh said over 5,000 Patersonians applied for the program, which is funded largely through a $500,000 donation by Twitter CEO Jack Dorsey, with another $50,000 kicked in by local developer Charles Florio. For the next year the 110 residents selected for the program will receive $400 monthly cash payments on debit cards issued by Mobility Capital Finance, which is partnering with the city.

“There are many people in need in our city, and things have gotten worse because of the pandemic,” Sayegh (pictured, center) said at a City Hall news conference. “Prices have gone up. The price of medicine has gone up. Everything has gone up, except their salaries.”

Paterson, where 27 percent of the population is below the poverty line, becomes the latest city to offer poor residents a guaranteed income. Los Angeles, New Orleans, Newark, Columbia, S.C., and Stockton, Calif. all joined the experiment in alleviating poverty with direct cash relief.

Paterson’s median household income is $41,360, which is half of the state average, $82,545. The need in Paterson is great, yet only 2 percent of the people who applied are to receive guaranteed income, and only for the next 12 months.

What happens after that will depend largely on whether the federal government gets behind the effort in a big way. Private donations have carried the experiment thus far, but it would take a commitment of taxpayer dollars to make a difference.

Sayegh would like to see another round. “Hopefully, we can expand on it,” Sayegh said. “Reach out to more people and see if they want to contribute as well.”

Joining Sayegh at the press conference was Monseriate Reyes, who recently received her debit card in the mail. Reyes (pictured, right) is a home healthcare worker who lives with her husband, two children, and grandchild in an apartment. She was out of work for four months during the pandemic.

The pilot, which was announced in April, was open to individuals making less than $30,000 and families with a combined income of $88,0000.

Reyes was one of 110 Paterson residents selected by a random drawing conducted by the Center for Guaranteed Income at the University of Pennsylvania. She breathed a sigh of relief when her debit card arrived in the mail earlier this month.

“Now, my refrigerator is full,” she said.

Paterson’s chief data officer, Harsha Mallajosyula, is compiling statistics on Paterson’s pilot and will feed that information to the academics at the University of Pennsylvania, Sayegh said. Penn will then crunch the data to evaluate the program’s overall effect.

Wole Coaxum, the founder and CFO of Mobility Capital Finance, said the idea of sending cash payments isn’t all that radical when compared to other government programs that send checks to families, such as the child tax credit.

“I think you are going to see more and more of this as we re-imagine how to help people in our communities,” Coaxum (pictured, left) said. An added benefit is that the debit cards connect poor people to the banking system, a demographic that traditionally has been underserved by financial institutions, he said.

Mobility Capital Finance has set up a network of ATMs in Paterson with free withdrawals. And recipients can use the cards at CVS, Duane Reed, 7-11 or Rite Aid to make deposits. Sayegh said his administration is talking to Paterson merchants about offering discounts on the debit cards. There’s also talk of connecting residents to discounts through Amazon Prime, Sayegh said.