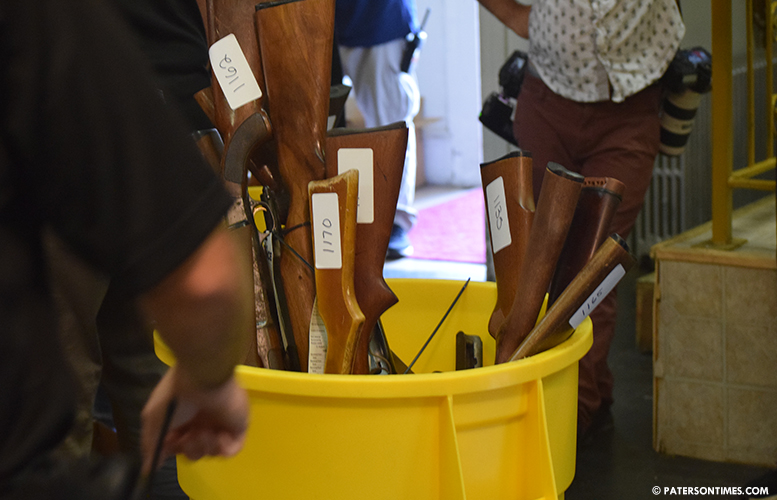 Hundreds of guns were turned in at two churches in Paterson that were part of a gun buyback program on Saturday.

Officials said 281 weapons were turned in at the Gilmore Memorial Tabernacle Church in the 1st Ward and the St Luke Baptist Church in the 4th Ward. Both the 1st and the 4th wards are known for gun violence.

“Any one of these guns could prevent the next shooting,” said Passaic County prosecutor Camelia Valdes. “We’re not unrealistic in our thinking. There are a lot more guns out there.”

Valdes said the gun buyback gave people a chance to turn in guns that they had in their houses.

“We’re really aggressive in getting guns off our streets. We seize them or we buy them back,” said mayor Andre Sayegh, standing in front of the Gilmore Memorial Tabernacle Church.

“It’s hard to trace where these guns are coming from,” said Sayegh. He said sometimes homes elsewhere are burglarized and the guns end up in the streets of Paterson.

Each weapon fetched as much as $250. The prosecutor said forfeiture funds were used to buy back the weapons.

Police showed two highly lethal weapons that were bought back as part of the program. One was a so-called ghost gun, an AR-15 assault rifle which did not have a serial number, that has the capacity to rapidly fire shots and do extensive damage. And another was a 12-gauge shotgun, that, when fired, releases many pellets, to do serious damage.

“Every gun that we get off the street is a success. Every single one of these guns could be used to kill someone, and the fewer guns that we have on the streets, the safer our communities are,” said acting New Jersey attorney general Andrew Bruck.

Both Sayegh and Valdes hope there will be some reduction in shootings in Paterson as a result of the program. Paterson has seen a big increase in shootings since the start of the pandemic last year.

Some wondered whether the right guns were bought to dent gun violence in Paterson. Many of the weapons bought back were legal guns, said Sylvia Farrar, vice president of community relations at the Ceasefire Community group. Often people turn in their old rifles for money, she said.

“We want the illegal guns, the ones that are killing people. The ones that have bodies on them. We want those guns,” said Farrar. “It’s still a decent effort, but we’re not reaching our target audience.”

The target audience are the people with guns in the crime-ridden neighborhoods of Paterson.

“I believe it will have an effect because it’s fewer guns on the streets,” said Thomas Farrar, pastor at the Gilmore Memorial Tabernacle Church. “It will make a difference.”