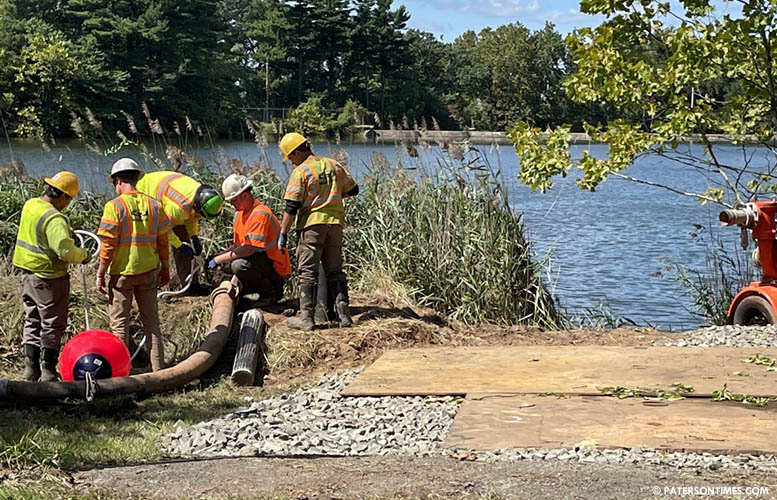 The cleanup at the New Street Reservoir began Friday and could take up to a month, which means the boiled water advisory posted for Paterson, Passaic City, and parts of Clifton and Woodland Park will remain in effect until further notice.

Under a plan approved by the New Jersey Department of Environmental Protection (DEP) on Friday, the PVWC is pumping four million gallons of fresh water a day into the New Street Reservoir in an effort to reduce the turbidity caused by flood. PVWC engineers estimate that if all goes well, it will take 10 days to replace the water in the reservoir. But if there are complications, the process could take up to 30 days.

A crew installing a pipe that will deliver fresh water to the New Street Reservoir which was contaminated by runoff.

The PVWC says the water quality is improving — an engineer told the commissioners that the water coming from the tap is now “drinkable” — but the boiled water advisory will remain in effect as a precaution.

Meanwhile, the PVWC is ramping up its bottled water distribution. The utility has ordered 138 pallets of water a day to be distributed in Paterson, Passaic, and Clifton, and the New Jersey Office of Emergency has stepped into take charge of the operation.

The boiled water advisory has been in effect since September 2, the morning after the remnants of hurricane Ida dumped more than seven inches of rain in Paterson. But many residents still don’t know about it because of poor communication between the PVWC and the three cities following the storm.

Bottled water distribution sites were set up Paterson, Passaic and Clifton. But it was clear from the low turnout that many residents didn’t know about the water emergency. And many still don’t, and several commissioners were sounding the alarm on Friday.

“Nine out of 10 residents don’t have a clue,” said Ronald Van Rensalier commissioner from Passaic City. “All the things we’re telling them not to do, like using the water to brush their teeth, they’re doing.”

Lou Amodio, the interim director of the PVWC, acknowledged that “mistakes were made” in getting the word out. But he said the severity of the storm was “unprecedented.”

“This was not something that was normal or common,” Amodio said. “We did the best we could. We can be faulted for many things, but I’m very proud of the staff we have.”

Amodio said nothing could have stopped the flood, and the miscommunications were understandable. “There was nothing anyone could have done to prepare for this,” he said. “When you’re in the middle of a crisis, you can’t think of everything.”

Commissioner Joseph Kolodziej countered that the PVWC has to do a better job. “We may have done a good job, but the public perception is just the opposite,” he said.

Kolodziej said with climate change, the PVWC has to be better prepared.

“This may have been unprecedented, but this is the precedent,” he said. “With climate change we’re going to see this happen again.”

The PVWC first posted the boiled water advisory on its website and social media accounts on September 2, the morning after the storm. It was then up to officials in Paterson, Passaic City, and Clifton to spread the word to their residents.

But instead of posting the advisory in a prominent place, the cities initially buried it on their websites, and information about where to pick up bottled water remains sketchy. Amodio said the PVWC is ordering 138 pallets of water a day, but will need help from Paterson, Passaic City, and Clifton to distribute it. You can’t tell from any of the municipal websites if or where water will be distributed over the weekend.