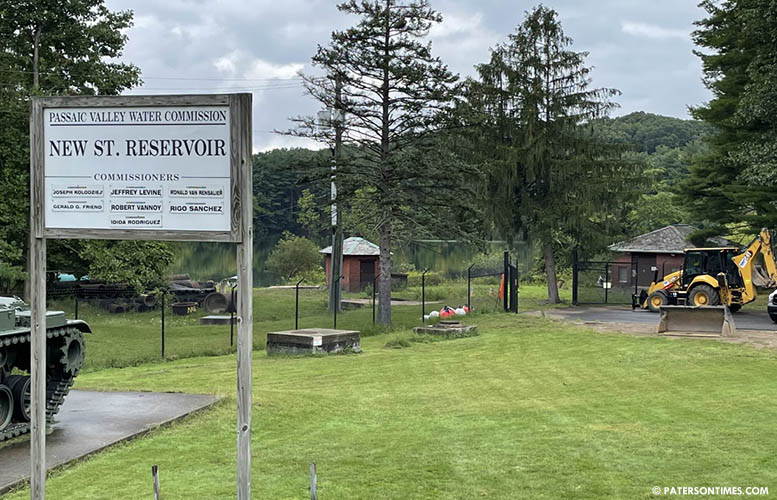 The Passaic Valley Water Commission has finished cleaning the New Street Reservoir that was contaminated by runoff from hurricane Ida, but the boiled water advisory for all of Paterson, Passaic City, parts of Clifton, and Woodland Park will likely remain in effect until mid-October, officials say.

Phase One of the cleanup, which involved pumping fresh water into the 52-million-gallon reservoir on Garret Mountain, was completed last week. Now the task is to flush each of the system’s 4,013 hydrants and 550 miles of water mains — a round-the-clock operation that will take several weeks.

“We estimate it will take another 10 to 14 days before the situation is resolved,” Lou Amodio, the interim executive of the PVWC, said Tuesday. “We know people are tired of the situation. We’re tired, too. But the most important thing is to ensure public health and safety. We wish to thank our customers for their patience and understanding.”

The PVWC says the flushing operation has been a success, and the water in the New Street Reservoir is clean enough to drink. But residents are advised to continue boiling water before using it, and the utility plans to continue handing out cases of bottled water until the state Department of Environmental Protection lifts the advisory.

The PVWC is currently distributing about 4,800 cases of bottled water a day in Paterson, Passaic and Clifton. That operation will continue until all the hydrants and mains have been flushed and the water has been thoroughly tested.

Residents have been advised to boil water since September 2, the morning after hurricane Ida rolled through and triggered flash flooding all over the state. The storm dumped more than seven inches of rain on Paterson, which fouled the New Street Reservoir with runoff from nearby Barbour’s Pond.

Although the PVWC posted the boiled water advisory on its website hours after the storm, word was slow to trickle out to residents in Paterson, Passaic City, Clifton, and Woodland Park. Going into the storm, the PVWC had Twitter and Facebook pages, but not many followers, so it was left up to municipal officials in the member cities to spread the word.

Due to poor communications, many residents didn’t know about the water emergency until days after the storm. Bottled water distribution also got off to a slow start, but has since been taken over by the New Jersey State Police Office of Emergency Management and the Department of Homeland Security.

PVWC spokesman Joe Getz said the cleanup has thus far cost $1.2 million. Getz said the utility has three crews working around the clock to flush the hydrants and mains.

“They will not stop until they are done,” Getz said.

Water distribution at Skate Park in Clifton on Tuesday.

Residents in the Passaic City can get water at City Hall, the Dignity House shelter on Broadway, the Shop Rite supermarket on Paulison Avenue, the Super Fresh market on Jefferson Street, and the old Shop Rite on Eighth Street.

In Clifton, free cases of water are available at the skate park on Third Street, Grace Church on Hazel Street, the Clifton Senior center on Clifton Avenue, the Shop Rite liquor store on Paulison Avenue, Super Exito on Dayton Avenue, and the Super Fresh on Ackerman Avenue.