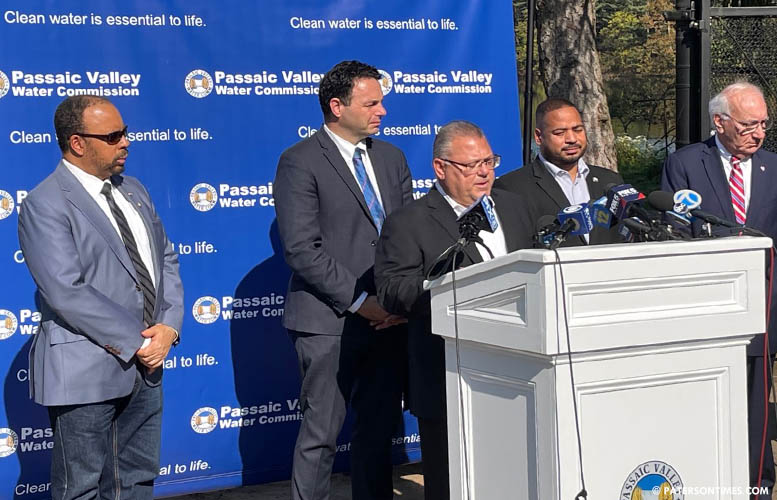 The Passaic Valley Water Commission on Friday lifted the boil water advisory affecting some 250,000 residents of Paterson, Passaic City, Clifton and Woodland Park, six weeks after the remnants of hurricane Ida deluged the area and contaminated the New Street Reservoir with a massive runoff.

The mayors of Paterson, Passaic City and Clifton gathered at the New Street Reservoir with PVWC officials to announce that the cleanup was over, the water has been tested and deemed safe to drink from the tap. Bottled water distribution sites are being shut down, and the PVWC is offering a $25 credit to its customers who live in the affected areas.

Lou Amodio, the acting business administrator for the PVWC, thanked the crews who worked around the clock to pump the reservoir clean and flush fire hydrants — and customers, who have endured six weeks of lining up to get bottled water. Not all the bills are in, but latest estimate is that the cleanup will cost ratepayers over $3 million.

“We don’t want this to happen again. It should not have happened in the first place,” Amodio said, alluding to the PVWC’s long-delayed plan to cover its three open-air reservoirs on Garret Mountain. That plan, which was originally scheduled to begin in 2015 with the draining of the Levine Reservoir on nearby Grand Street in Paterson, is bogged down in bureaucracy amid the ongoing fight between the PVWC and preservationists in Paterson’s Great Falls Historic District.

“We understand history, but the science is on our side,” Amodio said.

Lou Amodio, acting business administrator for the Passaic Valley Water Commission, announces the lifting of the boiled water advisory on Friday. He is flanked by mayors of Paterson, Clifton and Passaic City and commissioners from the PVWC.

Yet despite the existential threat of climate change, officials acknowledged Ida’s deluge caught them off guard. Many people were away in advance of the Labor Day weekend, and reverse 9-1-1 directory that the PVWC used in the early hours of the emergency didn’t contain many phone numbers.

“First of all, it was a holiday weekend, and a lot of people were off,” Amodio said. “And our Reverse 9-1-1 is not the best that it could be. So, the messaging that went out did not go out to the appropriate people.” So, the PVWC had to rely on the member cities getting the word out, Amodio said.

Ida’s deluge caused tons of silt to flow downhill from Barbour’s Pond and into the New Street Reservoir, which can hold up to 52 million gallons of already treated drinking water. Amodio said the massive runoff turned the reservoir into a “mud pit.”

And due to poor communications, many residents didn’t know of the water emergency until days after the storm. Initially, bottled water distribution got off to a slow start as well, and the NJ State Police and the National Guard were called in to coordinate the hand-out. According the PVWC, it has spent $1.7 million on bottled water in Paterson, Passaic City and Clifton.

There is no evidence that the contaminated reservoir caused any widespread sickness. Health departments in Paterson, Passaic City and Clifton say they didn’t get any complaints from residents. Clifton mayor Jim Anzaldi said two of his constituents complained to him about the water quality. Passaic mayor Hector Lora said his city hall was deluged with calls, but no known outbreaks of illness. Paterson mayor Andre Sayegh was unaware of any city residents reporting illnesses due to water.

Still, the mayors of all three cities vowed to improve communications.

“If the pandemic taught us anything, it was that crisis management is essential, as is communications,” Sayegh said.

The three mayors also joined the PVWC to support covering the reservoirs. Sayegh said aesthetic arguments against building huge water tanks at the Levine and New Streets don’t hold water in an age of climate change.

“Quite frankly, I don’t care what it looks like,” Sayegh said. “I care what [the water] tastes like.”

The PVWC says it will notify customers in the affected area of the $25 credit, which will be deducted from the normal $75 standard service charge.

Paterson, Passaic City and Clifton are also being reimbursed by the PVWC for the labor costs arising from water distribution during the past six weeks. Cost estimates from the three cities were not available on Friday.