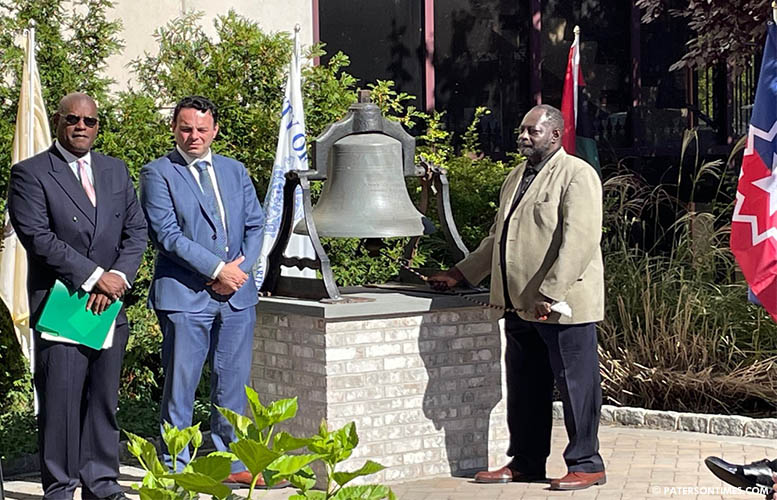 Paterson on Tuesday let freedom ring once as community and political leaders gathered at the Huntoon-Van Rensalier Underground Railroad memorial on Broadway for installation of the freedom bell.

The bell, which was cast in 1871, stood at the entrance to the Great Falls National Park since the mid-1970s. Visitors could ring the bell just for kicks when they entered the park, but now it will serve a more solemn purpose, thanks largely to the efforts of Jimmy Richardson, Paterson’s historian.

Two years ago, Richardson rang the bell at the Great Falls National Park during a ceremony to commemorate the 400th anniversary of the arrival of the first slave ship in America. Richardson suggested to the park supervisor, Darren Boch, that the Freedom Bell would be a better fit at the underground railroad site.

The memorial, which is located next to the police headquarters, opened in 2014. It marks the spot of a former spice warehouse owned by a Josiah P. Huntoon, a white businessman, and his assistant William Van Rensalier, a black engineer. Together, they operated a safe house in the years leading up to the Civil War that hid countless slaves escaping from the South.

The warehouse had long been demolished and the site was almost lost to history by the time the Paterson Historic Preservation Commission began designating historic sites around the city during the late 1980s. The city nearly sold the land to a fast-food chain in the 1990s, but backed down after pressure from members of the African-American community.

William Van Rensalier’s great-granddaughter, Dolores Van Rensalier, was living in San Diego, California, when she heard about the struggle in Paterson. Van Rensalier, whose relative Ronald Van Rensalier, is community development director in the City of Passaic, moved to Paterson to research her genealogy and learned that she was William’s descendent.

In 2004, she started a foundation to raise money to preserve the site. It took 10 years to get the monument established. She tells the story in a memoir, “Bridge to Freedom.”

On Tuesday, she presented Richardson with a plaque. Paterson’s Underground Railroad site is the only one in the country with a freedom bell, she said.

“The historic bell is about to ringing right here, under your feet,” she said.

As a monument, the Huntoon-Van Rensalier site pays tribute not only to two men who risked their lives to free slaves, but to the community activists who helped preserve the grounds. It’s a symbol of cooperation and commitment to a cause, as political leaders up and down the ranks were quick to point out on Tuesday.

“Seven years ago, Paterson recognized Josiah and William as the star figures who helped countless families throw off the shackles of slavery,” Rep. Bill Pascrell told the crowd. “Today, we continue that march with the installation of the historic Freedom Bell. The bell will be sounded today in recognition of those who helped create this sacred space.”

Councilwoman Ruby N. Cotton talked about growing up in the South on a sharecropper’s farm, and how her elders set a dignified example of hard work and endurance. Passaic City mayor Hector Lora applauded all the people who got involved in the monument and the bell, but reminded everyone to continue the hard, daily work of making for a more equal and equitable world.

Assemblywoman Shavonda Sumter (D-Paterson) said a bill she sponsored, A711, would create a task force to study reparations for slavery. Sumter said if the bill passes, the committee would consider policy changes that were “intentional, transformational and strategic,” to address inequality.

“Together, we can replace systemic discrimination with systemic liberation,” Schaer said, drawing cheers from the crowd.