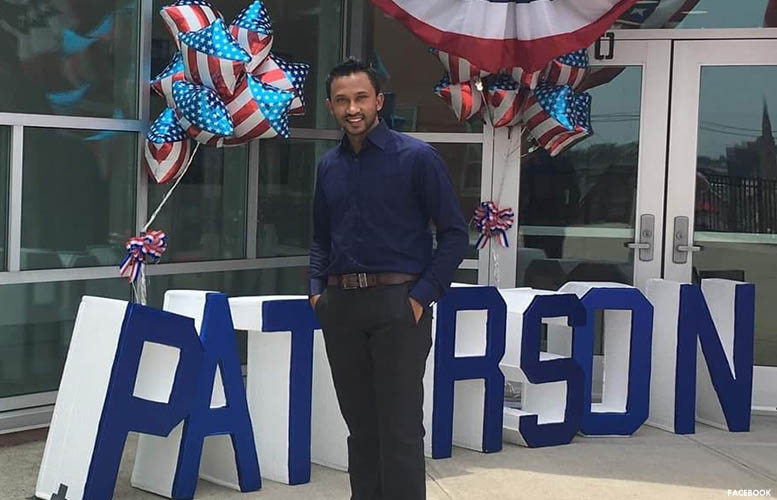 A high school teacher running for one of the three up-for-grabs City Council seats says he is putting $50,000 of his own money towards his campaign.

Forid Uddin, 35, said he is loaning the money to his campaign to preserve his independence from special interest groups.

“It’s so important that voters can have confidence that I am not beholden to campaign contributors or political influence,” said Uddin. “I wouldn’t run if I had any doubt that I will always be able to vote my conscience on what is best for our city without any outside control.”

Uddin is one of three people to have successfully qualified to run in May. Other two are incumbent Lilisa Mimms and challenger Casey Melvin. In all, 19 people picked up petitions to run for the three at-large seats.

Uddin said key issues for him in the campaign are high taxes and sewer fees, skyrocketing crime rates, and lack of basic services such as sporadic garbage and recycling pick up. His focus on high crime rates and lack of services in Paterson is a dig at incumbent mayor Andre Sayegh.

Sayegh, who is running for re-election in May, is putting together his own slate of at-large candidates, according to sources.

Uddin was allied to Sayegh before a rift developed between the two men.

“It’s nothing personal with mayor Sayegh,” said Uddin when asked what led to the rift. Sayegh had encouraged him to run for City Council, but then unilaterally moved against him in favor of Gilman Choudhury, according to sources.

Sayegh appointed Uddin to the Paterson Planning Board when the two men were allies.

Uddin and Choudhury both hail from the city’s Bengali community, which always has a high voter turnout rate and played a key role in getting Sayegh elected four years ago. Sayegh is hoping Choudhury can deliver more votes than Uddin.

Uddin has made the bold decision to align himself with Sayegh’s old nemeses, disgraced former mayor Jose “Joey” Torres. He appeared jointly with Torres at two of the former mayor’s events.

Torres’ appeal has increased among voters as Sayegh has stumbled over the past four years. That’s what happened after former mayor Jeffery Jones stumbled eight years ago, allowing Torres to return for a third term in 2014. Sayegh’s administration has been marked by high turnover of cabinet members leading to instability and lack of basic services for residents. Sayegh has also hit residents with sewer fee increases.

When asked why he accepted the backing of a convicted former mayor, Uddin replied he received the endorsement from Paterson Forward. He noted Paterson Forward endorsed him for City Council and Torres for mayor.

Paterson Forward’s treasurer is Torres’ wife Sonia Torres. Political insiders see Paterson Forward and Torres as one and the same. Uddin said there are other people in the organization that are voters in Paterson. Uddin’s advisers see Torres’ backing as a win for their candidate. Torres still retains a big base in the city’s Hispanic community, they argue.

Uddin said he is still raising money from city voters.

“I do plan to raise funds from grassroots supporters, and of course will work with any individuals or organizations that share a common goal in advancing Paterson’s interests, but it will always be on my own terms, working solely for our residents,” said Uddin.

Uddin’s bid for a City Council seat is an outgrowth of his community activities. He founded the Bangladeshi-American Sports League to encourage young people to get involved in sports like soccer. He also served on the Passaic County Census Committee that he says was key to helping Paterson reach first class city status.

Uddin is an English as a second language (ESL) teacher at John F. Kennedy High School. He has been working for the Paterson Public Schools since 2014. His salary is $55,000, according to district payroll records. Uddin also works as a teacher portfolio review coach at Rutgers University.

Uddin has a bachelor’s degree in English Literature from the Shahjalal University of Science and Technology (SUST), a public research university in Sylhet, Bangladesh. He has master’s in Urban Education from the New Jersey City University in Jersey City.

Uddin owns a home in the Hillcrest section. He lives there with his wife and daughter, he said.

“Political division and factions, and sadly criminal activity, have historically crippled Paterson’s progress and ability to provide the level of service and lifestyle we deserve. I can’t promise to eliminate that from others, but I hope that putting my money where my mouth is in order to best serve the people of Paterson demonstrates to the voters that I refuse to become part of the problem,” said Uddin.