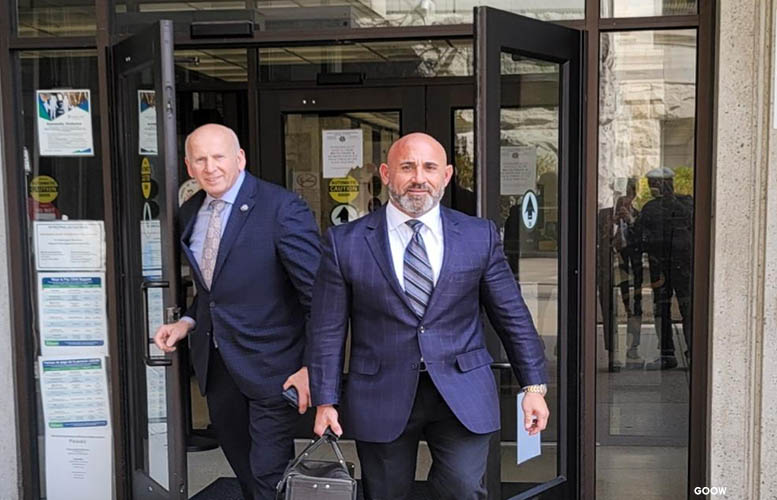 Former councilman Aslon Goow, whose residency was questioned by prominent developer Charles Florio, has won in court to remain on the mayoral ballot.

Goow’s attorney Michael DeMarco (pictured, right) said the other side failed to prove their case. He moved for dismissal and Passaic County judge Thomas Brogan agreed with him.

“It’s shameful we had to go through this,” said Goow (left) on Wednesday afternoon just after the three-hour long hearing ended.

Younes’ side presented three witnesses. Two private investigators and Goow’s wife, but that was not enough to prove their case.

Florio said Goow admitted that he lives “temporary” in West Milford because of his sick brother in-law. Goow “never stated if he will move back to Paterson but had his mail go to Paterson so he is a Paterson resident,” said Florio.

Florio said Goow “lied” when he claimed he lived in a guest room at the Edmund Avenue house.

Goow has said he has always resided at his family home on Edmund Avenue. He invited reporters to his house and showed proofs — driver’s license, utility bills, and other documents — that showed his residency remained at the Edmund Avenue property.

“I wish Goow the very best in the election but Paterson deserves a mayor who will actually live in Paterson not use it as his P.O. Box,” said Florio.

Goow remaining on the ballot is a large loss for Sayegh. Goow resonates well with the city’s large Muslim population that Sayegh needs to win re-election.