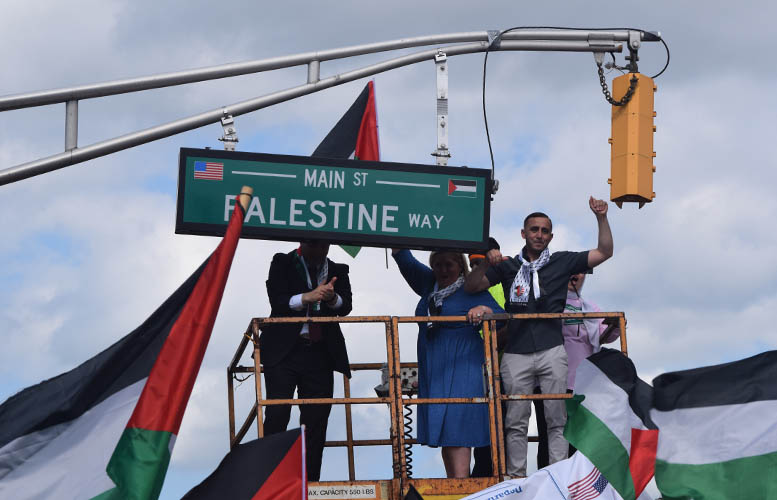 As many as two thousand people gathered in South Paterson on Sunday afternoon for the unveiling of a street sign naming a section of Main Street to Palestine Way.

Main Street from Gould Avenue to Buffalo Avenue, a stretch of South Paterson dotted by Palestinian-owned businesses on both sides, is now also known as Palestine Way.

“Palestine Way is long overdue,” said councilman Al Abdelaziz, who is of Palestinian heritage. He sponsored the street naming measure in the City Council that led to the renaming. Palestinians have been calling Paterson home since the early 1930s. Their numbers increased during the 1970s after the U.S. liberalized its immigration policies. In the 1980s, Palestinians opened the first Middle Eastern restaurant on Main Street, according to the street naming resolution. “We are the hub and the capital in America for Palestinians.”

Abdelaziz estimated there are approximately 15,000 Palestinian-Americans in Paterson.

“We make history today. Today, everyone, everywhere is Palestinian,” said mayor Andre Sayegh to the large crowd that gathered on Main Street for the occasion.

Many chanted for the liberation of Palestine and freedom for its people. Rania Mustafa, executive director for the Palestinian American Community Center, which organized the event, held a moment of silence for Palestinian journalist Shireen Abu Akleh, who was reportedly killed by Israeli forces last week.

May 15 also marked the Nakba, catastrophe, referring to the expulsion of Palestinians from their land in 1948.

“All the Palestinians that are here were kicked out of their homes,” said Rafi Tutanji, 52, who has lived in Paterson for 30 years. His family was pushed out of their land in Palestine, he said.

Tutanji is hoping some day Palestine will be liberated and its people allowed to return to their homes.

“Our kids are going to bring our home back,” said Tutanji.

After the speeches, officials unveiled the new street signs that read, “Palestine Way.”