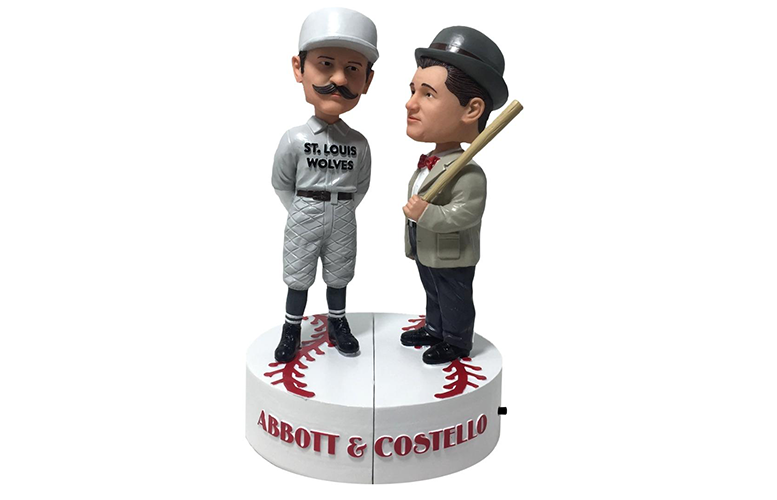 A talking bobblehead set has been unveiled commemorating the 85th anniversary of the legendary Abbott and Costello comedy routine, “Who’s on First?”

Bobbleheads, first ever to be released featuring the famous comedy duo Bud Abbott and Lou Costello, plays over five minutes of their skit at the touch of a bottom.

“One of the greatest comedy duos of all time, Abbott and Costello’s ‘Who’s on First?’ routine is a timeless classic. The bobblehead set is sure to be a hit and will be a must-have for fans!” said Phil Sklar, co-founder and chief executive officer for the National Bobblehead Hall of Fame and Museum.

Sklar said the comedy routine was first heard in 1938. The duo even performed it for president Franklin D. Roosevelt.

Abbott and Costello both hailed from New Jersey. Abbott from Asbury Park and Costello from Paterson. Costello is a legend in Paterson. He has a park, the Lou Costello Memorial Park, which underwent a full renovation last year, named after him, highlighting his status in his hometown.

Sklar said the duo was the most popular comedy team in the 1940s and early 1950s. They were the highest paid entertainers in the world during World War II. Their ‘Who’s on First?’ routine aired to a national audience for the first time on March 24, 1938 during a radio broadcast of the Kate Smith Hour show.

The premise of the sketch is that Abbott is identifying the players on a baseball team for Costello. The infielders’ names are Who (first base), What (second base) and I Don’t Know (third base) and the names can simultaneously serve as the basis for questions. The key to the routine is Costello’s mounting frustration set against Abbott’s unyielding formality, said Sklar describing the comedy routine.

Time magazine in 1999 called the routine the “Best Comedy Sketch of the 20th Century.”

Sklar said the limited-edition bobbleheads will start shipping in February. He said they are available for pre-order through the National Bobblehead Hall of Fame and Museum’s online store.

Click here to visit the online store to pre-order the bobbleheads.