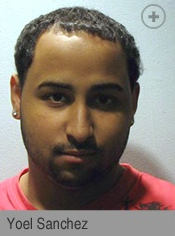 Yoel Sanchez, the man wanted in the shooting of an 18-year-old near Union Avenue and Kearney Street, has been arrested after a weekend manhunt, according to Paterson Police.

Mr Sanchez, 21-year-old, was driving near East Main and Bergen Street at around 2am, when he passed a stop sign without halting his vehicle. A police patrol vehicle noticed a red  Hyundai run a stop sign; officers stopped the car, at which point another man and Mr Sanchez exited the vehicle and began to walk away from it. Officers recognized Mr Sanchez, and arrested him.

Mr Sanchez is awaiting a court appearance; in the mean time he is being detained by police.