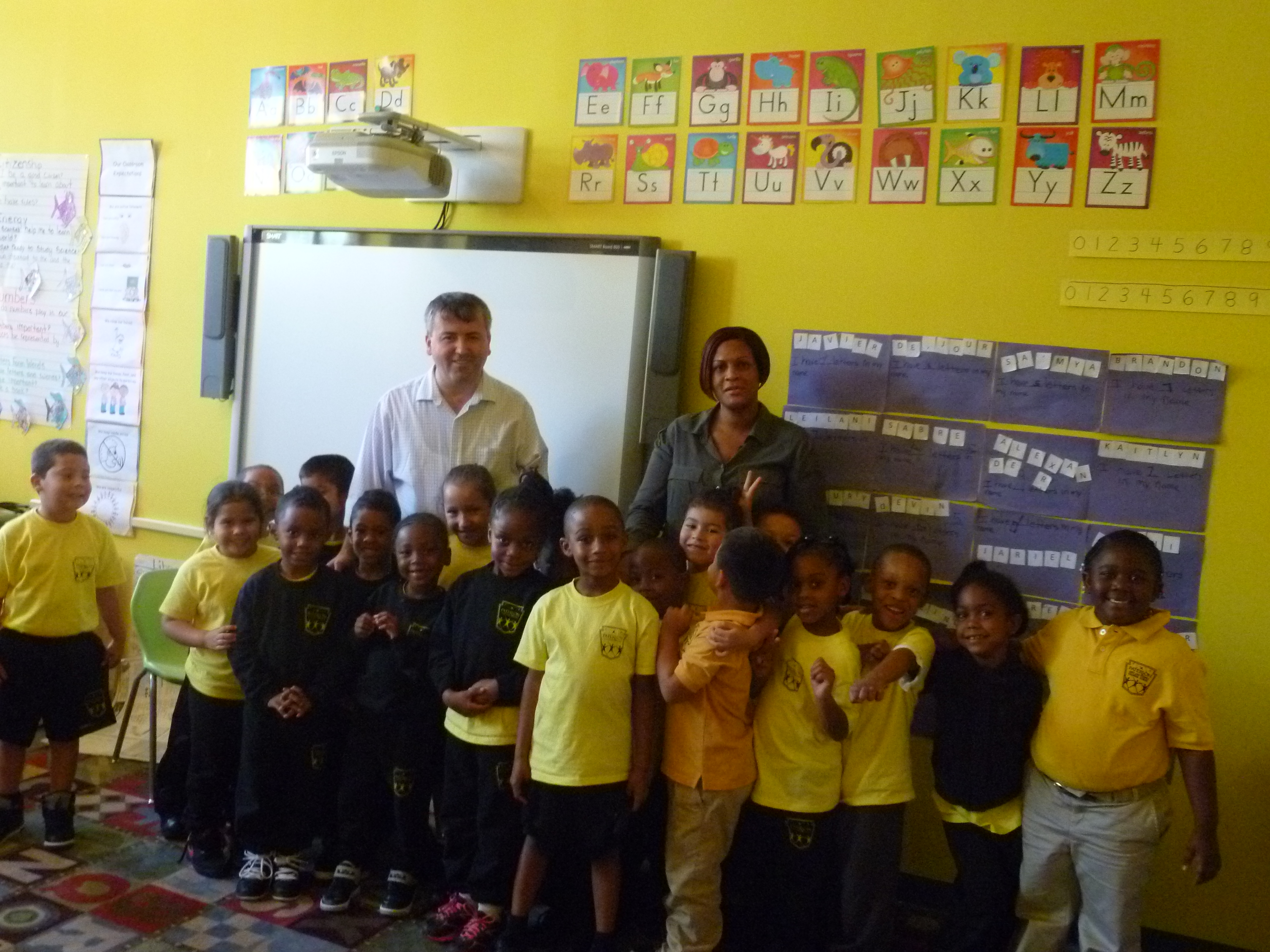 It’s a half-day at the Paterson Arts & Science Charter School, where more than 330 students, most of them Patersonians, receive instruction.

“All of them had to pass through a lottery to get here,” said Lori Cobb (pictured right), school principal. Cobb, a former public school teacher, who taught in the city’s school district, said, “I taught at School 20, Alexander Hamilton, and Dale Avenue.”

The school posted advertisements all over the city to inform them of the lottery, said Cobb. “We put ads in the paper and did a mass mailing.”

Parents came out in droves to register their students into the charter school for the coming school year, but not all the students were allowed to attend: those who lost the lottery were placed on the school’s waiting list that includes more than 500 students for the six school network called the North Jersey Arts and Science Charter Schools.

With six schools: two in Garfield, one in Hackensack; two in Passaic, and its newest in Paterson, the network has an enrollment of 1700 pupils in Bergen and Passaic counties. Its school on East 33rd Street is the largest in terms of enrollment, and has plans of adding one extra grade every year until it reaches eight. Nihat Guvercin (pictured left), the network’s chief executive officer, a physics teacher from Turkey, said once this school becomes successful he intends to expand throughout the city.

Guvercin, who has four children, said he so adamantly believes in his schools that he sends his own kids to them. He bemoans his brief experience with a public school in Garfield saying, “I had my kids last year in public schools, in pre-k, and I never got any communication. Even if I wanted to know anything about my school.” To keep parents properly informed the network has created e-letters that are sent every week to parents to keep them up-to-date with school happenings. And the communication doesn’t stop there.

The school has a phone application that tells a parent the moment the teacher marked their student present in the morning; the moment the teacher issued an A; and the moment the student misbehaved. “We want parents to feel connected,” said Guvercin, who wants the parents to be informed of everything that happens in school. If a student talks excessively in class, a note, typed up by a teacher, gets sent directly to the parent’s phone, sort of like a text message. Guvercin points out that no such technology for communication between the school and the parent exist in the city’s school district.

The network’s school in Bergen County, Bergen Arts and Science, is described in the annual report card issued by the Department of Education as a school whose “academic performance is high when compared to schools across the state.” It ranks in the 76 percentile state-wide, while 92 percentile among its peers. However, its school in Passaic City, which opened two years ago, is not very great with ranking in 3 percentile among its peers; Tim White, the school’s spokesperson said, “It takes three to four years” for a school to show improvement.

“These kids were coming from public schools with almost kindergarten level education, and it takes time to get these kids to a reading level where they can be proficient in state testing,” said, Guvercin. “In the 3rd year, 4th year, we’re going to be able to close the gap.” These schools often add a new first grade class every year; after four years, the first graders move to 4th grade, and never having been dulled by the public schools, they become high achievers, propelling the school’s score in state exams ever higher.

“There are students in 5th grade that have no reading level,” said Guvercin. “There is no magical formula to close the gap. It takes hard work and dedication.” Guvercin is concerned about instilling these two qualities in the pupils who attend his school, and is not worried about locals wishing to close the school down due to parking inconveniences .

He said, “We invited them to our school before school started.” Neighbors said, the invite came to them after the school’s location was finalized, and left them with little say whether they wanted the school in their neighborhood. “We even prepared some cookies and coffee, but no one came,” said Guvercin. A pragmatist, he said, he simply wishes to provide the children of Paterson with a decent school option. “There is nothing more valuable than providing quality education especially for a city like Paterson,” stated Guvercin. “We believe one day they will understand,” he said of the neighbors petitioning to remove the school from East 33rd Street.

Guvercin hopes to make his school in the city better than those operated by the district. “If charter schools cannot provide the expected level of quality education there is no need for their existence,” said Guvercin.

Like the multi-colored signs stationed outside both entrances to the school announcing “Friday is half-day”, Guvercin and Cobb hope to build a school that is artistically and technologically innovative – a school that leaves the antiquated public schools in the district sinking in the educational quicksand.