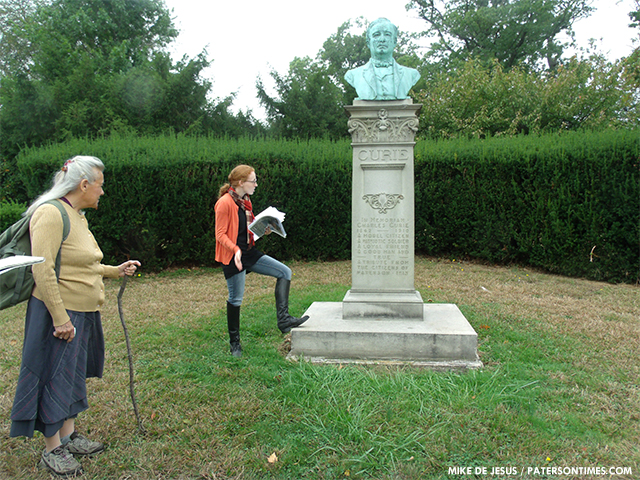 The city’s historic commission held a tour of the two parks straddling the city on either side on Sunday morning to shed light on the memorials and histories of Westside and Eastside Parks.

Gianfranco Archimede, executive director of the Paterson Historic Preservation Commission, began the parks tour with a presentation inside the Van Buren House, commonly known as the white house, in Eastside Park, where he gave a historical outline of the parks movement that was taking place in the United States, whose effects culminated into the designation of the two parks.

“In 1877 this part of the city was not developed. It was not yet a residential district. It was barely even farmland,” said Archimede of the eastern section of the city. That year, said Archimede, marked the beginning of what became to be known as the parks movement in the city which was ushered in by Henry B. Crosby, an alderman of the city. “Mr. Crosby started the discussion about the need for public parks in a city that was booming and growing quite rapidly,” said Archimede. Crosby pushed to get lands on both sides of the city to turn them into parks.

“This is the Van Buren House, it was constructed 1867-1868. It is of Greek revival,” said Kelly Ruffel (pictured in orange), historic preservation specialist with the commission, who said the style was very popular at the time around the country. Ruffel took a group of about 10 people, who came out for the tour, around the park, shedding light on statues and monuments, as well as contrasting what was in the parking during its heydays as opposed to what it has turned into today. At certain sections of the parks were vandalized statues, and in other sections were missing plaques that were carried off by vandals. Plaques from a memorial for Thomas F. McCran, a New Jersey attorney general who grew up in Paterson, was nowhere to be found near his bust, because it was ripped out and stolen.

Mimi Chin, who came for the tour from New York, was shocked at the vandalism, saying she couldn’t believe this was happening. Chin said, she attended the tour, after learning about the Great Falls National Park, and it being the 2nd largest fall in the Northeast.“Someone told me about Paterson falls which I didn’t even know it had a falls, said Chin. ”I had to go check the place out.” Chin attended the commissions historic downtown tour and saw the fall a month ago, and returned to learn more about the city, because she says, she has seen everything there is to see in New York City, and is expanding her horizon.

Many of the fountains and statues were covered up with blue wrapping, hindering the tour from getting a glimpse of important monuments. “It’s unfortunate timing,” said John Carluccio, a resident of the city. “It’s too bad, but you know, with more and more tours happening there will be a sensitivity to the issue.”

The covered statues and light rain that was falling all morning and into the afternoon did not stop the tour. After eating lunch, the now much thinner, 7 person tour continued, into Westside Park, where Archimede, the commission’s director, led the tour. “This is probably the oldest standing building in the city,” said Archimede, pointing towards the Van Houten House near the tennis court in the western park. “The Van Houten family owned this portion of the land.” After the city came to own the house was used by the park’s superintendent to take care of the park. “He lived at the white house or here,” said Archimede.

There was emphasis on the western park’s boating history; after the park was designated, a good number of people, there are postcards with images, began using it as a recreational boating facility. And the park with small docking stations along the park, made it into a boating hub for residents.

Jory Miller, a Montclair resident, who came out for the tour of the eastern park, said he first came for the Great Falls and after seeing that he realized there must be other treasures in the city, and that’s party why he attended the tour. “There’s amazing history here,” said Miller. “Today was great.”

Archimede, said his commission’s mission isn’t to give tours like this one but to preserve and prevent the destruction of historical sites; he hopes residents interested in the history of the city will eventually come forward and take charge. Archimede said, he is willing to train residents to do tours like this one, and the commission can even provide manuals for tours to volunteers interested in doing them.