Seeking Asylum Is Anything But Easy for Bangladeshi Refugee | Paterson Times

Since 2009, when he was beaten up by his father’s political enemies in Bangladesh, Ibrahim Momin has been working toward one goal: getting political asylum in the United States. Now a resident of Paterson, Momin has been turned down for asylum twice, and spent months in immigrant detention centers, both in New Jersey and in Alabama. He also spent thousands of dollars on a long, dangerous journey to the United States. 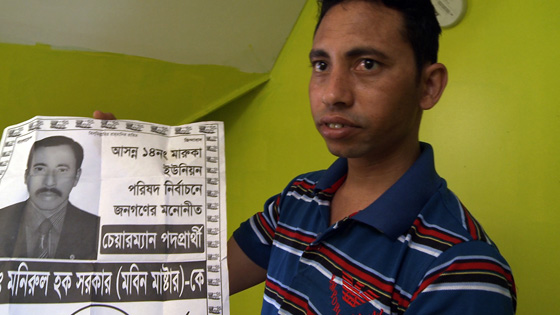 Holding up a black-and-white election poster of father, since slain, Ibrahim Momin feels the same fate could be in store for him if the U.S. fails to grant him political asylum. Photo: Beverly Peterson.

His status remains uncertain. “If I lose the immigration case they will deport me,” he said. “And the people who killed my father will do the same to me.”

According to a report issued by the Department of Justice, 306 Bangladeshis asked for political asylum in the United States in 2012, and just 80 asylum visas were granted. Freedom House, an independent watchdog group, says that “extrajudicial executions” are a problem in the country.

The long, sad story of Ibrahim Momin provides a window into the life of a political refugee. But much of the story would resonate with undocumented immigrants here for other reasons as well.

In 2009, when this story begins, Momim’s father, Mohammed, a rural politician in Comilla, Bangladesh, ran unsuccessfully for the chairmanship of a local union parishad, an administrative unit not dissimilar to municipal government in the United States. The loss was more than political for Momin’s family, many of whom were threatened and harassed by the victors. Just days after the election ended, Ibrahim Momin, then 31, was attacked by a group of about six assailants while walking back from a local bazaar. “One of them grabbed me by the leg, and they began beating me,” he recalls. “After shouting, some people from the marketplace came and saved my life.” Momins was hospitalized.

Following the attack, Momin’s father urged his son to leave Bangladesh. He recalls his father saying: “If you stay in the country, they will kill you.” Ibrahim fled to Ecuador, which he believed to be the easiest route into the United States. Two of his brothers fled to nearby Malaysia. A few years later, while sitting in an immigration detention center in Alabama, Momin would learn that his father had been murdered. 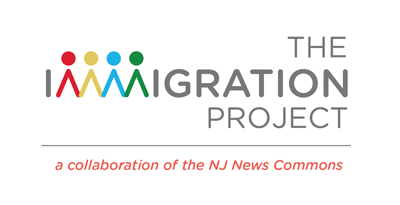 Getting from Latin America to the United States, where his father had connections who could offer him help, wasn’t easy. In Ecuador, Momin connected with a coyote — a human trafficker –who offered him passage across the Mexico-U.S. border for $12,000. He traveled through Colombia, Panama, Costa Rica, Honduras, Nicaragua and Guatemala in a small vehicle with four other customers.

It was not a luxury trip. Momin recalls walking for three days and nights crossing Colombia. Nor was there much in the way of provisions. Although he and his fellow passengers had carried small containers of water, those ran dry the first day. “We drank from streams coming down from mountains,” he said.

There was practically no food. Nevertheless, the coyote later charged them another $5,000 for food and shelter. Momin’s father provided these fees via Western Union. “He sold properties back home and sent money to me,” Momin said.

The journey took the better part of a year and the group finally arrived at the Mexican-American border in 2010. “I walked across the border” into the United States, he said.

Freedom didn’t last long. The coyote picked up four more passengers, and drove them to New York, but almost immediately upon arriving, a dispute led to all eight of the passengers being delivered into the hands of the Immigration and Customs Enforcement.

The smuggler had demanded more money from the group, threatening to return them to Mexico if they didn’t comply. A relative of one of the passengers, who had come to retrieve him didn’t like the way the negotiations were going and called 911. “They called the police saying one of their person was being kidnapped,” Momin said.

Police called ICE, which placed all eight into custody. Momin was transported to a detention center in Elizabeth, NJ, where he was kept for about three months.

Luckily, Momin was able to contact his father, who found a friend in Paterson who arranged $5,000 bail, getting Momin out of detention in January 2011. Afterwards he filed for political asylum. Momin recalls the judge asking: “’What kind of documents do you have? Who beat you? Why did you flee your country?’” Again, he contacted his family back home. This time, they sent copies of his medical records and affidavits. But according to Momin, the immigration attorney he retained for $1,000 was late in filing the documents and his request was denied — a fact he didn’t learn of until a run-in with New York City Police Department months later.

Caught in the Bronx

In August 2012, while waiting for a train in the Bronx, NY and chatting with a friend, Momin says he was approached by an undercover police officer who asked for identification. He didn’t have ID, and told the officer about his asylum application. Authorities discovered that his application had been denied, and Momin was once again handed over to ICE.

It was during this detention, which lasted from August 2012 to May 2013 that Momin learned of his father’s death two weeks after the fact. He was able to call his brother in Malaysia who said, “They killed Dad,” and provided details. According to the brother, Mohammed Momin’s political enemies lured him out of the house, kidnapped him, beat him, and then dumped him under a truck on a highway.

Three months into Momin’s second detention in New Jersey, he was transferred to Alabama to await deportation. When an officer presented him passport papers to sign, Momin refused. Either out of kindness or indolence, or because Momin’s refusal to sign passport papers was a lucky move, the official presented him with another paper: a release form that would set him free.

Momin signed it, and got out of the Alabama detention center after serving three months. Altogether, including the stints in New Jersey and Alabama, Momin’s second detention had lasted nine months.

While in detention, Momin filed an appeal of his first asylum ruling, which was again denied. “The judge did not believe my story,” he said.

Amy Gottlieb, program director of the American Friends Service Committee’s Immigrant Rights Program in Newark, explains: “Cases are often denied because the person doesn’t cleanly fit the definition of a refugee or because the judge or asylum officer does not find the person to be credible.” Momin could not understand the judge’s decision, particularly following his father’s murder. “I have a younger brother and a little sister back home, whom they have threatened,” he said. “And they are threatening to evict my mother out of her home.”

The U.S. State Department, in its own 2012 report, has documented a political climate in Bangladesh that includes “enforced disappearances” and “extrajudicial killings.’ Yet the number of Bangladeshi immigrants who are granted asylum requests last year is quite low.

As of this publication, Momin is preparing to file his third appeal by gathering written testimonies from more than 20 witnesses who saw firsthand the brutal killing of his father. Gottlieb says that, in cases like these, it can take a year or more to get a hearing on the calendar. Any entanglement with local police could once again lead to Momin being handed over to immigration officials and detained.

For now, Momin lives by himself in relative peace in the United States, where at least he is not afraid of being killed by his father’s enemies. “If they let me stay,” he said. “It will save my life.”

J.M. Rahman is a reporter with the Paterson Times, an online news site based in Paterson. The video was shot by Beverly Peterson, assistant professor in the School of Communication and Media at Montclair State University, and was edited by student Joe Bavazzano. The story and video were produced for The Immigration Project, a collaborative effort of the NJ News Commons.