After a month of deliberation and discussion the city council on Tuesday evening voted in favor of declaring violence as a public health crisis, a declaration which some say will allow the city to obtain grant funding from state and federal entities to address the violence issue plaguing the city.

“We are poised to position ourselves for resources,” said Rick Prince, president of the city’s Ceasefire group. Prince had said the violence in the city is out of control, and the first step towards correcting and lessening the violence is through recognizing the problem exists. “I know this isn’t a panacea,” said Prince. “It’s the first step.”

Bilal Hakeem, a city activist and the president of the Power Coalition, came out against the measure saying it’s a risky step that has good intention but negative implications. “It’s a dangerous step to take,” said Hakeem. He called for public discussion on the matter prior to passage. “We need to have public discussion on this.” Hakeem said violence is common throughout the country, and that it is not unique to the city.

He said, just because there are some violent individuals, does not mean the city should declare violence as a public health crisis, because it sends the wrong messages. Hakeem said it is treating violence as a “mental disease,” and he is against that.

Majority of councilmembers came out supporting the resolution except Kenneth Morris, councilman at-large, and William McKoy, 3rd Ward councilman. McKoy asked for evidence, and he wanted to know which city that passed a similar measure was able to obtain “even five cents.” He said, “The evidence is not there.”

Morris agreed with Hakeem’s position saying, “This is not a Paterson problem, it’s a national problem.” McKoy voted against the resolution, while Morris simply abstained neither voting for or against the measure.

“This bill is moving us forward,” commended Ruby Cotton, the 4th Ward councilwoman, whose section of the city sees the most violence. “I’m expecting you to deliver results,” said Julio Tavarez, who voted for the resolution, to the small group that included Prince and few of his supporters who called for the passage of the resolution. Tavarez said he wanted to see stats and analytic data that show some sort of progress.

Andre Sayegh, mayoral candidate and 6th Ward councilman, voted for the resolution; Rigo Rodriguz, another mayoral candidate and councilman at-large, also voted for the measure. Jerry Flach, director of the Paterson Habitat for Humanity, has long said, almost a month ago, that this declaration will allow city’s non-profit agencies to obtain grants from without to address the violence problem within. 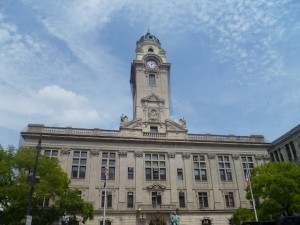